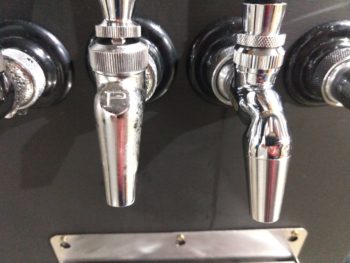 There are several different beer faucets to choose from when equipping your keezer. The most basic type differentiation is forward sealing versus rear sealing. The rear sealing are the most common type you will find in bars, with a sliding piston visible that comes out through the front of the faucet. Those faucets don’t do well unless you have a continuous flow of beer like is found in a bar. Don’t fool yourself into thinking you pour a lot of beer so the rearward sealing faucets will be fine. They’ll gum up and stick and you’ll be cursing that decision! So the popular homebrew faucets are forward sealing. 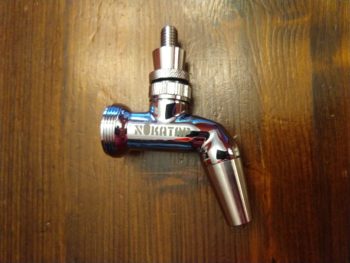 The long-time favorite forward sealing faucet for homebrewers was the Perlick brand, but they were expensive. Kegland introduced Intertap – Hands on Review – with a design variation of the forward sealing faucet and a more affordable price. Now Kegland has improved on their Intertap design with the new Nukatap faucet. As everything I’ve tried/researched from Kegland, they take a product and then engineer specific improvements to it- either to make it available at a lower cost or for specific improved homebrew functions.

With the Nukatap, Kegland focused on improving/reducing the propensity of beer to foam while being poured. Beer foaming is simply the act of dissolved CO2 coming out of the beer and then converting to gas at the surface of your beer. Cold beer can hold more CO2 than warm beer, so as carbonated beer warms, it causes CO2 to come out of solution and thus create foam. Similarly, beer under pressure can hold more CO2 than beer that is not under pressure. So as beer goes from the pressurized keg and into your unpressurized glass, this also causes CO2 to come out of solution and create foam. 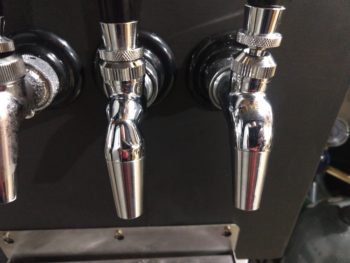 Nukatap on Left, Intertap on Right

Nukatap on Right, Perlick on Left

The first design action Kegland did for Nukatap was on the sealing mechanism. One big challenge at fighting beer foam is how to get the beer around the sealing mechanism inside the faucet. Perlick faucets use a ball to seal and shut off the flow. As beer passes by the ball, the flow creates a low pressure zone on the backside of the ball, and thus beer goes from high pressure to low inside the faucet, creating an opportunity to foam. Intertap faucets use a football-shaped shuttle inside the faucet. This shape is less prone to the low pressure zone like a sphere has. Nukatap has a variation on the Intertap football shape, and Kegland kept tweaking it to keep the flow calm as it passed around the sealing shuttle inside. The shape ended up looking like an old-school atom bomb, and hence the “Nuke tap” name was born.

The changes to the sealing shuttle were to address foam initiators from pressure drops, and then they focused on addressing the warming phenomena. The second design action they took was to minimize the weight of the faucet overall. Inevitably with a keezer, you have the beer inside in a cold chamber, and the faucet sitting out at room temperature. While pouring a glass, the cold beer flows out through the metal body of the faucet, causing the beer to warm up and the faucet to cool down. As more beer flows, it cools the faucet down more. Eventually, the cold faucet has less effect on warming the beer as it passes through, and therefore the temperature effect that encourages CO2 to come out of solution is minimized. By reducing the mass of the faucet, there is less metal that has to be cooled, and therefore you should get to this point sooner. 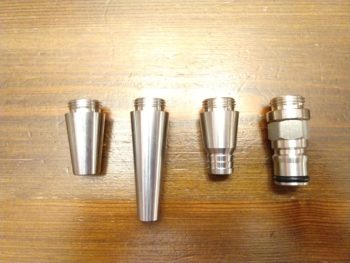 In addition to design actions to reduce foaming, the Nukatap, like the Intertap, has interchangeable spouts. The spout is threaded onto the main body and can be changed by simply unscrewing it by hand. In addition to the standard spout there are a number of optional ones: a stout tip with a lengthened nozzle, one with a barbed end to attach a hose, and lastly one with an actual ball lock fitting on it. The stout nozzle has a metal plate up top with 4 small holes and then some sort of plastic aeration ball after that. 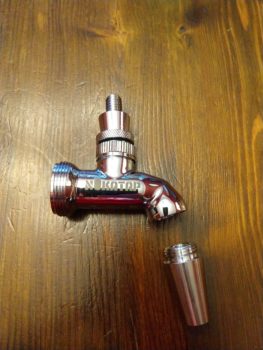 The Nukatap itself is quite attractive. The weight-saving efforts they put into the design, ended up leaving it looking like a bicep that spent many hours in the gym. The weight difference was notable. The mechanical feel of operating the tap was precise and clean. Looking at the insides of tap, the sealing mechanism was very obviously different from both the Perlick and the Intertap. So the design work spent on coming up with something new definitely succeeded. 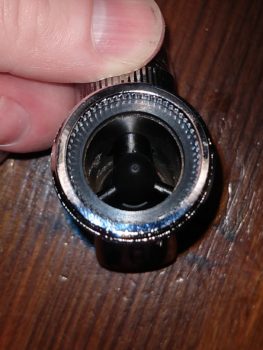 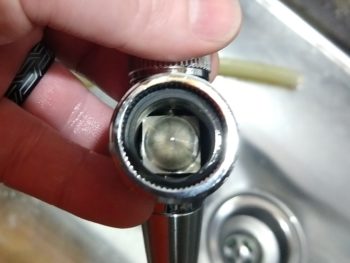 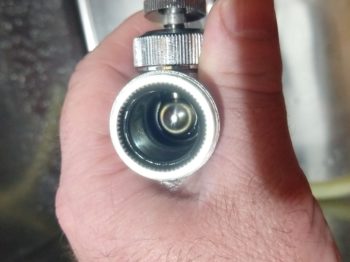 The tap worked fine and I had no issues with it. I tried some simple experiments swapping between my Intertap and the Nukatap and I couldn’t see any difference in first beer foaming. I don’t doubt the engineering work that went into the design, and these things make sense that they would improve performance. I just didn’t happen to notice them. I tried taking temperature measurements of the inside of the faucet in comparison to the Intertap next to it on the keezer. After sitting for several hours, the Nukatap did seem to be a couple of degrees warmer than the Intertap as I moved them between two different positions on the keezer. So although the lower mass of the Nukatap makes it quicker to cool down as cold beer flows through it, the same physics principle means it’s also quicker to warm back up once the beer stops flowing. 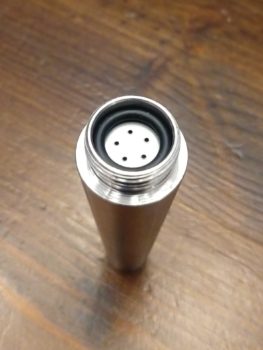 Looking Down Top of Stout Nozzle

Looking up Tip of Stout Nozzle

As for the different spout tips, I tried out the stout tip, with interesting results. It created a ton of tiny foamy bubbles in the poured beer, almost like it was stripping out all of the carbonation and turning it into a giant glass of foam. From there it looked like a Guinness commercial as the tiny bubbles danced and cascaded, slowly leaving behind a growing layer of liquid. The beer was then a unique combination of thick foam up top, and a carbonation-free layer of liquid at the bottom. And as you drank you got a combination of both in your mouth. Now I need to brew a good Guinness clone to really test it out.

The barbed spout seemed particularly pointless, since 1/2″ tubing slips on easily and tightly over the outside of the standard spout. I don’t have a beer gun any more, but I could see how the ball lock tap spout could be very handy to use the beer gun connected to the spout rather than to the keg.

Although the Nukatap didn’t deliver any detectable difference in first beer foam, it definitely delivered good looks, and a well thought-out design. It worked well, and the changeable nozzles provide some potential customization that might work well for you, depending on your particular wants. And if you’re chipping away at a foam problem, sometimes you want every little bit of help you can get. 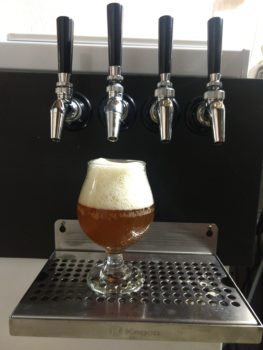 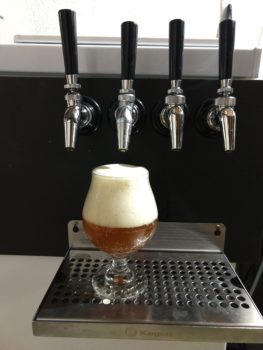