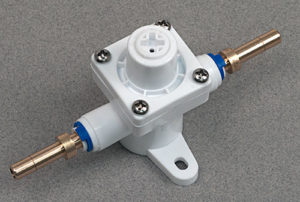 This review is by Michael Gomez.  Michael is an advanced homebrewer with years of experience.  Michael typically brews no sparge all grain using his two vessel setup with the occasional BIAB all grain batch.

About this inline regulator

Inline Regulator via William’s Brewing.  About: “This in line regulator features 1/4″ hose barbs, and can be adjusted with a flat head screwdriver. It can reduce incoming pressure from 150 PSI to 1 PSI. It is very handy to use when you want to use a single output C02 regulator in a draft system, but supply different kegs with different dispensing pressures. 4.75″ long with included brass hose barbs installed.”

This is basically an inline secondary regulator.  You still need a primary regulator attached to your CO2 tank.  The idea is, you set the primary to the highest pressure you will use (without exceeding specifications of any component of your system) and then use these regulators inline (one per line) to fine tune pressure and carbonation [See: Balancing Your Draft System].  As an example, you could set your primary to 25 PSI for faster force carbonation and set each line to a different pressure based on desired carbonation level.

Setup and Hands on Review

After setting up my kegerator, I realized wanted more options when it came to co2 pressure. The cost of secondary co2 regulators, one for each keg, seemed quite expensive. I decided I would get a 3 valve manifold, I found one at a reasonable cost at William’s Brewing [Gas Distribution Parts at William’s Brewing]. I also found these in line regulators. I was already planning on adding some quick-connects to my setup for easy line swaps, and I added an in line pressure gauge.  I only needed one since I can easily add and and remove to check/adjust pressure. 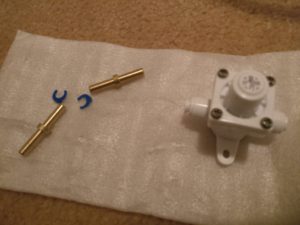 A picture of the Inline Regulator 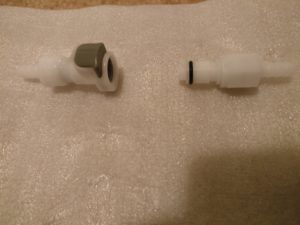 Quick disconnects.  I use these on each run and on the CO2 inline gauge. 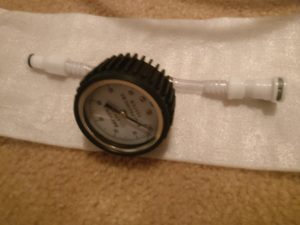 Back side view of the inline pressure gauge assembly. 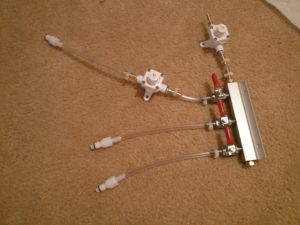 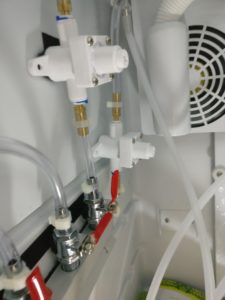 I decided to mount the manifold inside my kegerator using very strong velcro adhesive tape, if you do this make sure you clean all surfaces with rubbing alcohol or acetone and make sure surfaces are dry.  Here’s a picture of the installed manifold.

A picture of the installed co2 gauge during the setting process.

As I was backing out the screw, I would “burp” the pressure out of the lines by pressing on the center post of the quick-disconnect just past the gauge, I kept backing out the set-screw until the gauge was reading 11psi which is what I decided to keep my main serving pressure at.

At this point you can repeat the process for each inline regulator you have. 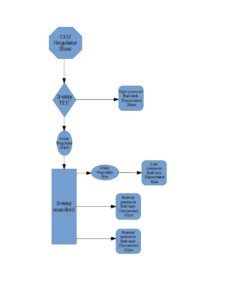 A flow-chart showing my CO2 setup

Just before the first regulator, I have a stainless steel TEE that came with my kegerator, I used that to maintain a “high pressure” disconnect for quick carbonating my beers as well as giving me the option to keep one keg for sparkling water should I choose, this line will be at the same pressure as the main CO2 regulator, so in this example 35psi.

Even though they are cheap and made from plastic, they seem high quality to me. The 1/4” fittings are actually john-guest style push in fittings but they seem very snug when connected and I don’t have any concerns about leaking. The set screw is very sensitive, less than a quarter turn can adjust the pressure by more than 5psi. The screw turns very easily too, and nothing really protects it from being turned by accident, it does have a phillips pattern on it that you can use a screw driver on, but i’d still be cautious, I could see something rubbing it and throwing off the pressure one way or the other. They’re much smaller than I thought they would be, which is a good thing since it is a bit compact in my fridge.

I think coupled with the manifold and the valved quick-connects these really give a premium feel to my system and lots of “nice to have” options and it wasn’t really that expensive to add.