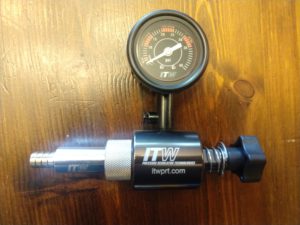 Keezers are one of the cool inventions homebrewers brought to the world of household appliances. Homemade kegerators and freezers converted to storing and dispensing homebrew allow homebrewers to exercise their creative muscle. Breaking down the function of the homebrew keezer, there are three main categories: 1) Providing CO2 to the beer, 2) Keeping the beer cold, and 3) Serving the beer. For sure, the category of serving the beer is where all the bling comes in, with different style taps and fancy tap handles. But this review is about some gear for the less flashy side- providing CO2 to the beer. 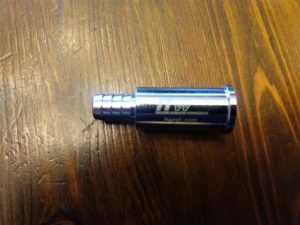 ITW Pressure Regulator Technologies is a business focused on pressure regulation in the medical and beverage fields. They focus on unique devices within this space. The Gov Reg is a pressure regulator designed for the commercial bar industry that can be used in the homebrew world. It’s a replacement for your secondary regulator that you’d typically have mounted inside your keezer to adjust supply pressure down to serving pressure. Typical secondary regulators will have their own adjustment knob and a dial gauge to read the output pressure you adjust to. The ITW Gov Reg serves this function, but it breaks it into two parts. The first is the regulator body itself that regulates the pressure down, the other is a stand-alone tool that is used to adjust and measure the pressure. So you set the main body to the desired pressure with the tool while monitoring the gauge, then take the tool off and install the regulator into your CO2 system. 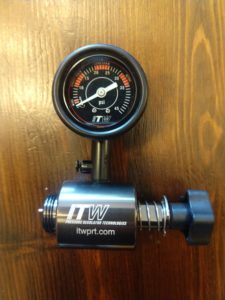 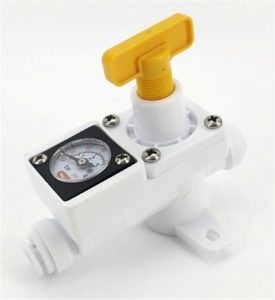 There are pros and cons to this kind of 2-piece arrangement. The con is you can’t adjust your pressure on a CO2 line conveniently. You have to shut off the gas supply, unscrew the Gov Reg and screw on the gauge tool, and then adjust. However, you probably know how often you adjust your regulators to know if that’s a real inconvenience or not. At a commercial/bar level, controlling the access to gas pressure adjustment is an obvious advantage. The ITW Gov Reg is stainless steel- meaning it’s easy to clean, can be boiled to sanitize, and connections can be pressure checked under water (which is a robust way to test for leaks). It also means the regulator is super-durable and not prone to breakage as you’re shuffling kegs around inside your keezer.

In addition to the streamlined, durable package, the other benefit the Gov Reg design has is pressure accuracy. Its unique design with large machined threads, check ball, and dual reaction springs give it this advantage. The typical diaphragm regulator with its adjustment knob and gauge is only accurate to +/- 2 psi. The ITW Gov Reg is much more accurate, within +/- 0.5 psi. That’s a big difference if you’re trying to dial in a specific pressure to be true to style for a particular beer. 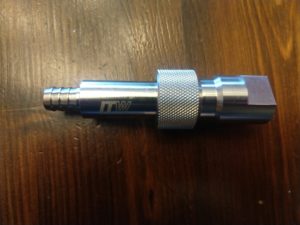 On opening the package, the shiny silver finish made the Gov Reg look impressive. Picking them up, the heft of them combined with the high quality surface helped back up the look to make an overall impressive package. The base Gov Reg comes with a tightening nut to screw onto the standard Sankey coupler used on commercial kegs. ITW also has a ball lock adapter available that screws on and provides a ¼” FFL attachment point to screw directly onto a threaded corny keg disconnect. This adapter was easily screwed on by hand to the Gov Reg with a knurled tightening ring with a compressible gasket inside that kept it airtight.

Next, I set the Gov Reg body to my desired pressure. For this, I hand-screwed the Gov Reg body and gasket to the adjusting tool and then connected the Gov Reg to my CO2 line. But when applying pressure, the gauge didn’t move for me. After some investigation, I found if I pulled back the rubber protective ring on the gauge, there was a small plug on top of the gauge. Pulling the plug out, a burp of oil came out. Putting it all back together, the gauge was now working. Talking with ITW about this, they noted they had seen issues were the dampening oil put into the gauge was sometimes being overfilled, and that resulted in the symptoms I saw. They had since made adjustments in their production. With the excess oil out, the gauge needle was moving and I could easily set the regulator pressure.

My initial approach was to put one Gov Reg on each of the 4 tapped kegs in my keezer and be able to set each to a different pressure. The length of the Gov Reg + ball lock adapter sticks up higher off the keg than a simple threaded connection. Measuring off the top of the keg handles, the standard fitting at its highest was 1” above the handle, and the ITW Gov Reg was 2”. This worked for me because I had plenty of headroom above my kegs in my keezer. The Gov Reg has a barbed fitting for a 5/16” ID hose on the opposite end. Depending on your gas line size, this might be a larger size than what you have and require the appropriate attachments on your gas distribution manifold. 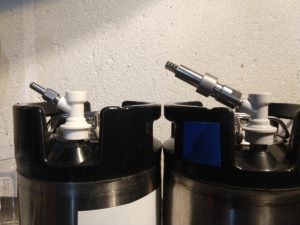 I then re-thought the features of the Gov Reg and how to maximize them in a homebrew keezer. Although I could replace the multiple adjustment knobs/gauges with multiple ITW Gov Regs, I stopped and thought about how often I run a different pressure in my keezer. Although I liked the idea of having a high pressure tap for bust carbonation and a lower pressure tap for normal serving, I rarely did burst carbonating. I would either forget it and over-carbonate the beer, or not do it long enough and it would seemingly have no effect. So in reality, I only needed a single regulator set at serving pressure and that would serve my purposes. 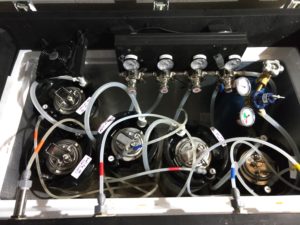 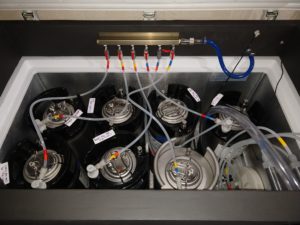 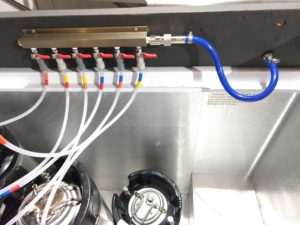 With this new vision of how to capitalize on the Gov Reg design, I set about on minimization. My previous keezer had a 4-way manifold with 4 separate adjustment knobs and gauges. That manifold took up so much space inside the keezer, that it would get in the way of kegs and their beer/gas lines and I struggled to fit 4 kegs inside. With the ITW Gov Reg, I could simplify the secondary pressure regulator in a much more package-efficient design and then just use a simple multi-valve gas distribution manifold. With the extra space freed up inside the keezer, I was able to fit 6 kegs inside easily (plus a 2.5 gallon one on the compressor hump) and be able to put them in and take them out without getting hung up on a bank full of giant gauges and valves.

The ITW Gov Reg might not be the right fit for everyone. But it does bring a few things to the table that are unique. Its stainless steel construction offers durability, and its gauge-less design frees up precious space inside your keezer. And if you’re trying to target an exact carbonation level referenced in some brewing books, the unparalleled pressure accuracy can’t be beat. For me, I’m ecstatic to have the space back inside my keezer to easily fit 6.5 kegs now!

Adjustment Holes in Regulator Align with Pins in Adjusting Tool 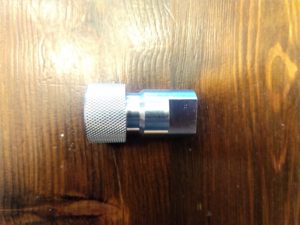 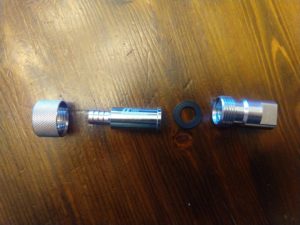 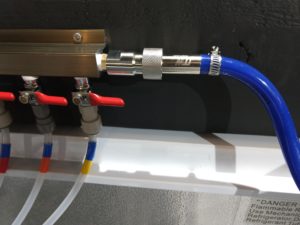 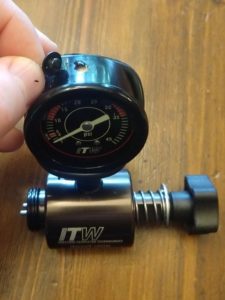 Special Thanks to ITW Pressure Regulator Technologies for providing the unit used for evaluation in this review.