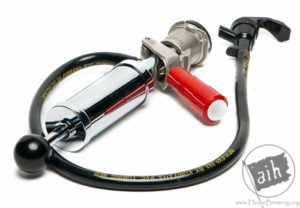 “D” system / American Sanke Coupler (Tap). This is the most common system available in the US. It is used by all the major breweries – Anheuser-Busch, Miller, Molson-Coors, and Labatt as well as most craft breweries. Visit our beer system listing for an expanded listing of beers that use the “D” system valve.

The keg coupler connects to the keg valve, “tapping” the keg. Both the gas line from the pump / regulator and the beer hose to the beer faucet attach to the coupler.

Party Pumps know them !!
Party pumps are generally used in single keg special event environments.
For example: Picnics, backyard BBQ’s, beach parties, etc.
The hand operated pump is the pressure source that forces the beer
Out of the keg. A classic mistake when operating a party pump is that
the user will pump first and then open the faucet, this generally
Results in a faster (foamy) pour.

Proper way of Dispensing/Pumping
1. Tap the keg.
2. Open faucet until all pressure is relieved.
3. Open faucet and begin pumping until desired
flow is reached.
4. Stop pumping, only pump with faucet open.
5. Repeat step #3 until keg is emptied.

More tips to Keeping it Fresh !!!
After purchasing the keg, it is recommended to cover the keg
with a blanket or keg jacket. This will insulate the keg and
keep it cool during transit.
Transport the keg directly to the location in which it
will be dispensed and put keg in a barrel of ice.
Keep pump and keg out of direct sunlight. When not in
use, submerse faucet and beer line in ice
on top of keg.