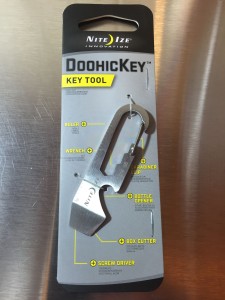 Here’s a look at their DoohicKey Stainless Multi Tool… 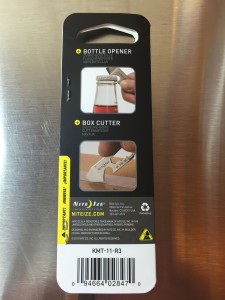 Back of the package (click to zoom).  Highlights a couple of the main features… Bottle Opener and Box Cutter. 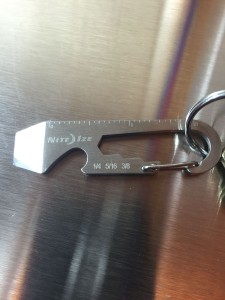 A look at the DoohicKey fastened to my keychain.  The Carabiner Clip works nicely for adding and removing it to your keychain or other gear. 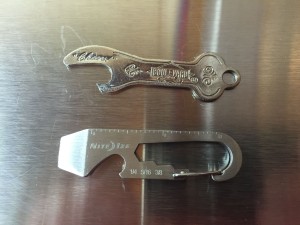 Prior to getting the DoohicKey, did I have a bottle opener on my keychain?  Of course I did!  Here’s what the DoohicKey is replacing.  A nice little key shaped opener I got after taking a tour of Boulevard Brewing Company in Kansas City.

I’ve had this for a little while now and I like it very much.  I already carried a bottle opener, so having that along is nice, but it’s nothing new.  I’ve used the opener a good bit and it works well.  The feature I use the most is probably the box cutter.  It’s been very handy to have on hand.  It’s not very sharp, but it’s enough to work pretty easily on most boxes.  Beyond that the carabiner clip is a nice feature to detach this puppy as needed.  As far as the other features, they may come in handy in a pinch but they probably won’t replace your toolbox.

Overall, this matches the quality and ingenuity I’ve seen in other Nite Ize gear.  It’s a nice little keychain opener that I can recommend.

HBF Reader EchoTony says: “I have this and it is great. Mostly use the blade edge for opening packages, but the opener has been handy a few times. Very simple, but works great.”

Also Check out the S-Biner Ahhh Carabiner Clip Bottle Opener from Nite-Ize.  That’s a carabiner style bottle opener that I always carry with me when I travel.  It functions as a handy carabiner (no climbing) and a bottle opener.