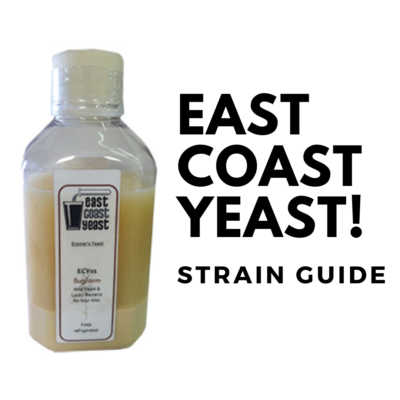 East Coast Yeast is tough to find in stock. It’s in high demand and distribution is very limited. Fermented NJ is one of a very few sources where you can actually get ECY. Stock is usually limited and can change quickly

BugFarm ECY01 – Large complex blend of cultures to emulate sour or wild beers such as lambic-style ales. Over time displays a citrus sourness and barnyard funk profile. Contains yeast (Saccharomyces, Brettanomyces) and lactic-acid producing bacteria (Lactobacillus, Pediococcus). The Brett population is > 50% of the culture. The BugFarm blend changes strains every calendar year for those who like to blend aged brews. The 2014 version contains a wild Saccharomyces yeast and four different brett isolates, L. brevis and Pediococcus.

Flemish Ale ECY02 – A unique blend of Saccharomyces, Brett, Lacto & Pedio perfect for flemish reds and sour browns. Dry, sour, leathery and notes of cherry stone. Designed for 5 gallon pitch, but may be added at any stage of fermentation.

Farmhouse Blend ECY03 – Saison brasserie blend (ECY08) with a pure Brettanomyces isolate from a small but fascinating producer of Saison. Produces a fruity and funky profile with some acidity gradually increasing over time.

Brett Anomala ECY04 – Formerly known as Brettanomyces intermedius and is now named as anomala along with strains of B. clausenii and B. anomulus. This strain was first identified in beer from Adelaide, Australia. Displays a strong ester profile with some light funk and acidity.

BRETT Blend #9 ECY05 – A blend of Brettanomyces that produces a dry, leathery, horsey and/or goaty profile. Can have a pronounced barnyard character and be added at any stage of fermentation. Funk is in the house, so let it out.

Berliner Blend ECY06 – Designed to be pitched into primary fermentation for Berliner weisse, Gosebier, and other styles where lactic sourness is desired, the blend contains a kolsch ale yeast, Lactobacillus brevis and Lactobacillus delbreuckii subspecies delbreuckii.

Saison Brasserie ECY08 –  A combination of several Saison yeasts for both fruity and spicy characteristics accompanied by dryness. Apparent Attenuation: up to 80%. Suggested fermentation temp: 75-85° F.

Old Newark Beer ECY12 – Sourced from the same defunct east coast brewery as ECY10, this pure strain was used as their “beer pitching yeast”. The strain has been identified as S. cerevisae, hence it is not a true lager strain, but should ferment at lager temperatures.

Munich Festbier ECY15 – From one of the oldest breweries in Munich, this pure strain is recommended for many German lagers such as Helles, Dunkel, and Oktoberfest. Suggested fermentation 46-54°F. Medium attenuation.

British Mild ECY18 – This yeast has a complex, woody ester profile and is typically under-attenuating (does not ferment maltotriose) leaving a malt profile with a slight sweetness that is perfect for milds, bitters, or “session ales”.
Recommended fermentation temp: 60-68°F.
Attenuation: 66-70%.

BugCounty ECY20 – A mixed culture of wild yeast and lactic bacteria to emulate sour or wild beers such as lambic-style ales. Over time displays a citrus sourness and barnyard funk profile. Contains yeast (Saccharomyces, Brettanomyces) and lactic bacteria (Lactobacillus, Pediococcus). The Brett population is typically >50% of the culture pitch. The blend of strains change every calendar year for those who like to blend or have solera projects. The 2014 version contains a wild Saccharomyces yeast, four brett strains, various lactobacilli and Pediococcus.

Oud Brun ECY23 – A unique blend of Belgian Saccharomyces yeast and Lactobacilli species (L. delbrueckii, L. mali for the bulk production of lactic acid, and L. brevis for lactic & slight acetic acid). For those who prefer sourness without the presence of Brett.

Brett Naardenensis ECY30 – An intriguing species of Brett that may create acetic acid with a mousy-tainted flavor, but after fermentation and aging (approximately 6 months) intense esters of strawberry, honey, ripe fruit with a tart, citrus acidity. The isolate was first found as a soft drink contaminant.

Senne Valley Blend ECY31 – “Intended for primary fermentations due to the portfolio of wild oxidative yeasts. Emulating ales by employing similar microflora recently observed from a prominent Lambic producer, this new blend includes various unique yeasts (Debaryomyces, Priceomyces , Wickerhamomyces, and Pichia). Contributes to aroma through the production of volatile compounds and higher terpenol flavors. Rounding out the blend : Lactic bacteria, Wild-type Saccharomyces from the Senne Valley, and multiple strains of Brettanomyces bruxellensis. Extremely wild with notes of smokey barnyard, musty funk, and ethyl acetate. We recommend aging a minimum of one (1) year.”

Dirty Dozen Brett Blend ECY34 – Twelve (12) different isolates of Brettanomyces exhibiting high production of barnyard “funk” and esters. Dryness, ripe fruit, and acidity will be encountered over a period of months and over time (>1 yr), may display gueuze-like qualities in complexity. Contains various isolates from lambic-producers, B. bruxellensis, B. anomala, B. lambicus, and B. naardenensis. For those who want the most from Brett yeast, whether a 100% Brett fermentation is desired or adding to secondary aging projects.

Brettanomyces Bruxellensis ECY35 – “Name of Alternate state or synonym: Dekkera intermedia. Isolated from Belgian Gueuze, this yeast will be quite funky with barnyard notes accompanied by ripe tropical fruit.”

Being a small yeast house affords ECY the luxury of providing homebrewers with a variety of yeast. Beyond the general availability issues that have already been mentioned ECY changes strains, this guide is a reference that lists all strains that we’ve become aware of. That to say, not all strains are produced.

East Coast Yeast is tough to find in stock. It’s in high demand and distribution is very limited. Fermented NJ is one of a very few sources where you can actually get ECY. Stock is usually limited and can change quickly

We are Homebrew Review HQ!  Our 10 Most Recent Reviews