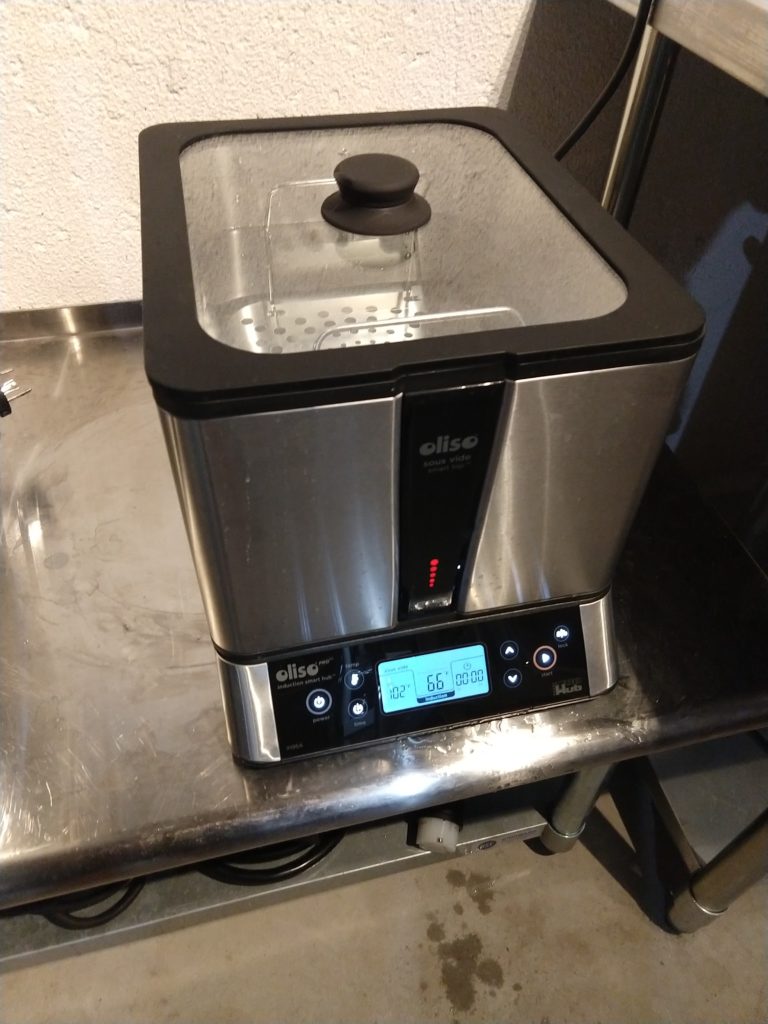 If you don’t know what a sous vide machine is, that’s forgivable. I’ve only met one person that’s used one. He raved about it so much that I had to investigate it. “Sous vide” is French for “under vacuum”. In sous vide cooking, you vacuum seal your steak (or whatever kind of food) in a bag, then place it in a pot of water that’s controlled to a specific temperature. The sealed bag keeps the meat from getting wet in the cooking water, and lets all the juices stay inside and not dry out. Depending on the “doneness” you want, you set the temperature of the water, throw your pouch in and then it cooks to the exact level you want.

Now getting us back to homebrewing, Oliso has a sous vide cooker that has features that support homebrewing. They combined the temperature control features of a traditional sous vide machine with the high power capability of an induction cooktop. The induction cooktop functions as the base of the machine, and when you set the SmartHub top on it, electrical contacts are made that change the induction top over to a temperature control machine. The tub has a built-in sensor that it uses to monitor the temperature of the liquid and adjust the power level accordingly. 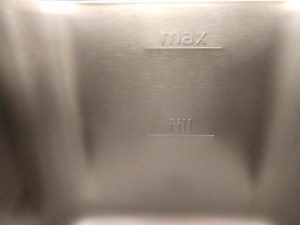 The lid is made mainly of glass, other than the soft rubber-coated edges that form a light contact seal to the tub. Therefore you can see what’s going on inside, and the lid prevents splashes if you’re carry it around with liquid in it. The main body is a large stainless tub with a brushed finish. There are stamped levels inside showing the “Fill” line (at about 1.4 gallons) and the “Max” line (at 2.8 gallons). There are some convenient handles designed into the top to give a robust place to grab it and move it around. The outside of the tub has a shiny stainless wall which makes it look attractive, but also keeps an insulating air barrier between the cooking tub and the surfaces your hands come in contact with. The front section has LED lights that illuminate to tell you when the heating element is on, and when it’s reached temperature. On the bottom of the tub there are a few gold-plated contacts that line up with contacts in the cooktop base that allow the two pieces to work together to control the temperature of the liquid inside. 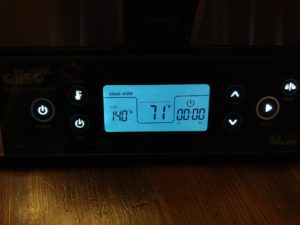 The base induction cooktop is a good size. Including the small control panel, it takes up about 11.5” x 15” of countertop space. An induction cooktop uses magnetic waves and requires a magnetically conductive pan in order to work. An induction cooktop is similar to a glass smooth-top electric stove, but the physics are different. Based on the way it works, rather than heating the glass top that in turn heats your pan, an induction cooktop passes through the glass to heat your pan directly. So if you don’t have a pan, the top doesn’t get hot. And if you move the pan off the top, it doesn’t have the lasting effect of a hot stovetop, and it cools down faster.

As a brewing device, the induction cooktop is what makes the Oliso unit different from a lot of other sous vide machines. Not only can you use the sous vide functions to control mash water at a set temperature, you can also switch over to open loop control and get your wort boiling. With 1500 Watts into a volume that has a max fill of 2.8 gallons, it allows it to heat to a boil pretty quickly (by comparison, the Grainfather uses a 1600W heating element for a volume of 8 gallons). 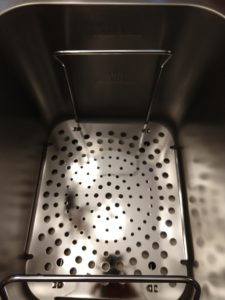 Strainer base inside of tub

The base kit comes with a strainer base that sits inside the tub. When used as a sous vide, this base keeps your vacuum-packed foods from touching the bottom of the heating pan. When used as a BIAB set-up, this base keeps your BIAB mesh bag from touching the bottom of the pan and potentially melting. Oliso also has a strainer basket (steam pan they call it) that rests on the top of the heating tub. It can be used to set your BIAB bag on after the mash, but since it sits at the 2.4 gallon level, this is really only helpful if you’re doing a very small batch. 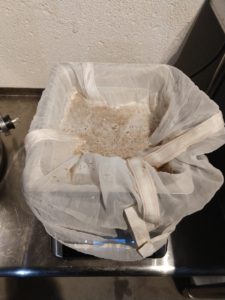 I’ve been curious to try this kind of small batch concept, as a sort of “pilot system” to my regular 5 gallon batches of homebrew. I like the idea of smaller batches. When I’m not drinking homebrew, I buy my beer a 6-pack at a time, which is about 0.5 gallons of beer. So I was interested to see how a small batch would work out. 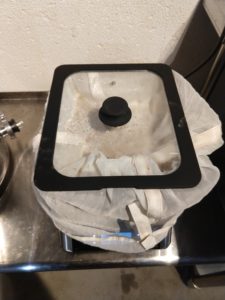 Mashing with Lid On

The first brew I made I did a full volume, no sparge mash (mash efficiency of 73%). It was a hoppy beer and there ended up being a fair amount of hop debris in the tub after the boil. In the end, I only got about 0.8 gallons into my 3 gallon fermentor, which after dry hopping, ended up with only 0.5 gallons into the keg. I was going for small, but I way over-achieved. 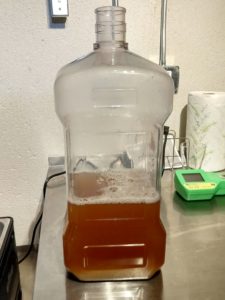 The second batch worked out much better. After I pulled the bag out of the mash, I added a half-gallon of water directly to the boil tub (no good way to rinse the bag of grains with a proper sparge). I still had a decent mash efficiency of 72%. On that one I ended up with about 1.25 gallons into the keg, which was much better. 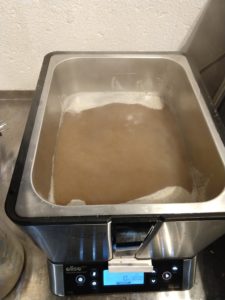 I used a BIAB bag that I already had, which was oversized for what I needed in the Oliso, but worked fine. With such a small volume in the mash (first batch had about 3 lbs of grain, the second had 4 lbs) no pulleys were needed or any strenuous lifting. The 1500W induction cooktop was strong enough to bring the ~2.5 gallons of wort to a good boil fairly quickly. It boiled off at a rate of 0.6 gallons/hr. I didn’t have a great plan for how to cool the wort with such a small volume, but I found my JaDeD Hydra immersion chiller fit in there sideways and worked quite quickly with such a small volume. Clean-up of the Oliso was fast and easy with the stainless tub being such a small size. 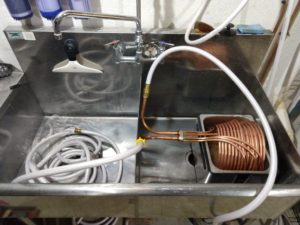 The controls were simple and intuitive (I didn’t even read the manual!). On the first brew, I did a multi-step mash (100, 122, 150, and finally 168F). The second batch was a simpler schedule of 150 and 168F. In both cases, I saw quite a bit of temperature movement, as reported on the LCD screen of the Oliso. I saw the temperature overshoot on the mash steps by 5-8 degrees on the digital LCD readout, and then drop after a few minutes. When measuring the actual mash with my own thermometer, I saw that it did not see the quick temperature swings like the Oliso reported. It did generally read about 3 degrees hotter than the set temperature, and also stayed pretty stable.

Overall, the Oliso SmartHub was very attractive/stylish-looking, and of very good build quality. The functionality of the sous vide temperature control combined with the induction cooktop set it up to be able to be used for homebrewing. And my trials proved it was capable, as I was able to do all-grain brewing via the BIAB process. I feel the temperature variation prevents it from being a viable “pilot system” to try new recipes with a smaller batch size, as repeatability will probably not always be there. But if you’re space-constrained, and it’s easier to convince your spouse to buy a sous vide machine (that can also be used to brew beer) than a dedicated brew rig, the Oliso is an option for you. 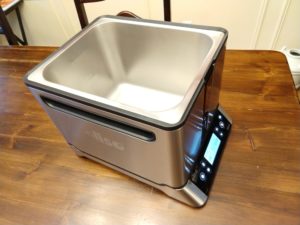 Machine with lid off 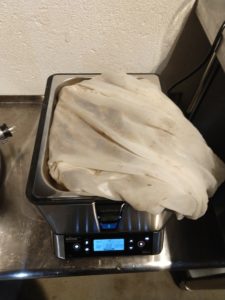 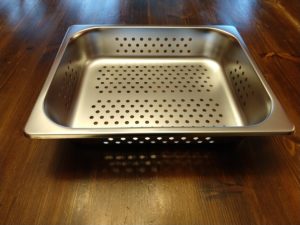 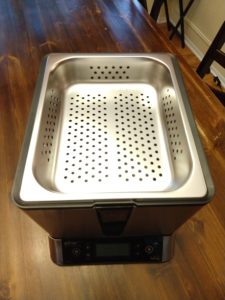 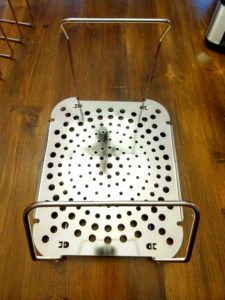 Special Thanks to Oliso for providing the unit used for evaluation in this review.

Make sure the components you use are compatible and rated for your intended application.  Contact manufacturer with questions about suitability or a specific application.  Always read and follow manufacturer directions. review:oliso tag:tpr