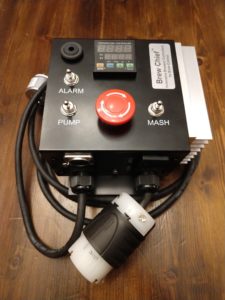 Electric brewing systems are great. I’ve been a convert for a few years, loving the ability to control temperature precisely/easily during mashes, and the “set it and forget it” aspect that helps support multi-tasking with other household duties while brewing. Of course the thing that makes this all possible is the brew controller. It does all the hard work in the background so you don’t have to think about it.

Get the Gear, Review Continues Below

Tom Hargrave of Brew-Control has been brewing since 1977, and designing and building electric brew controllers since 2012. He openly admits that it took about 3 years and a dozen design iterations until they were producing a quality product. They now offer several different controllers, depending on how you’ll use it. There are boil controllers, which have a simple adjustment dial to adjust output power from 0-100% and on/off pump control. Mash controllers that have a PID controller where you set a target temperature and the PID adjusts the output to match your target temperature. BIAB Controllers that combine both the boil controller function and mash controller into one unit. And other combinations of controllers that add in control of more pumps and more heating elements. 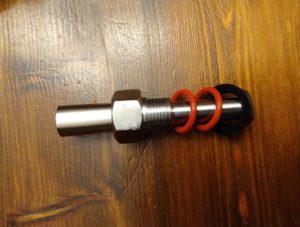 Brew-Control’s temperature sensors are designed and built in-house because they were not happy with the quality of the sensors they were able to buy on the market, and customers were experiencing a lot of sensor failures. They build their own by taking the sensor component and mounting it inside a 1/2″ NPT thermowell with conductive epoxy and then connect this to a robust XLR style connector. These XLR connectors are more robust and durable for multiple connect & disconnect cycles than the typical small sliding collar connectors. Brew-Control has tested their custom-built sensors and they have a temperature accuracy of 0.15%- which is 0.2 degrees at a mash temperature of 150F. 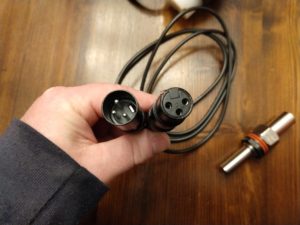 Unpacking the Brew-Control RIMS Controller from the box, the first word that came to mind was “neat”. Not as in “cool”, but as in orderly and clean. The black paint on the aluminum box was a powder coat of sorts that was both shiny and dull at the same time. The surface was durable to handle the accidental impact of something hitting it (that shouldn’t hit it), and was easy to clean from any wort splashes (I didn’t mount it to the wall for my trial). The switches were neatly labelled and clear to read. The plugs, switches, and controller display were laid out in an orderly fashion. The whole thing just looked like it was clearly thought out. 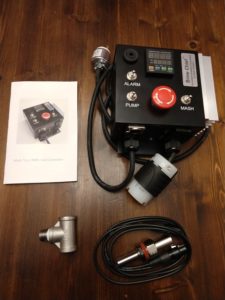 What comes in the package

I used the 120V version of the controller with the L6-20R twist lock receptacle on it, so it was compatible with my Blichmann 120V/2000W RIMS Rocket and its L6-20P plug/cord. This is controlled by a PID controller with some small push buttons on its face to control the settings. Brew-Control tests their controller together with the temperature probe (sent in matched pairs), and they program into the PID controller any temperature offset they found for the system when they test it before shipping out. It also comes pre-configured with Proportional, Integral, and Derivative controller gains based on their trials and experience. I found it was pretty stable out of the box, and only had a small 1 – 2 degree overshoot when initially reaching the target temperature. But it did linger about 1 degree higher than set point for quite some time (~10 minutes). I did a special run and entered the controller’s autotune mode to let it set the PID gains automatically. After that I got better response with it not sitting high for a long time after reaching temperature. 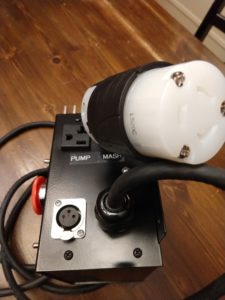 Where you plug stuff in

I was happy with the response of the controller and its ability to get to temperature quickly and stay stable. However, the adjustment of the set point was a little tricky. To change the target temperature, you had to press and hold two small buttons for a full 5 seconds, let go, and then when the display was flashing you could navigate via simple button pushes to adjust the target temperature up or down to the nearest 0.1 degree (for you real control freaks out there). It took a little getting used to when doing a multi-step mash, but wasn’t a major problem.

The temperature sensor/thermowell was impressive. I really dug the hefty XLR connection cables, as they felt robust and solid. And the thermowell housing was equally hefty, with no fear of accidental bending or snagging on a BIAB mesh bag. The giant red stop button looked like overkill when I first saw it, but after using it, I found it actually quite convenient. It only required a simple push with your palm/elbow/knee and you shut off the heating element and pump.

One thing this controller has that I haven’t seen often is the alarm. Within the settings menu of the PID controller, you can set the alarm temperature. I initially thought this would be a great sneaky way to use the box as a “poor man’s Bluetooth” and I could set it to go off when the wort reached my target temperature. After trying this once, and hearing the shrill scream coming from it, I quickly abandoned that idea. Since it is the same alarm that’s used in smoke detectors, the volume and tone are really meant to capture an actual problem and warn you to come running. I left it off for the rest of my trial.

Overall, the controller worked great. It was a nicely made piece of gear, and seemed like it would hold up for the long haul (based on the 6 mash sessions I used it for).

Thank you to Brew Control for generously providing the unit used for evaluation.