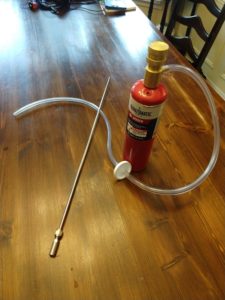 Frequently cited benefits of proper wort aeration are avoiding these fermentation problems: 1. Long lag time from yeast pitch to start of fermentation, 2. Stuck or incomplete fermentation, or 3. Excessive ester production affecting flavor. What can be overlooked in these explanations is that not all fermentations are created equal. The more “challenging” your fermentation, the more prone to these problems you’ll be. Fermentations for yeast are more challenging if you’re fermenting cold, if you’re using re-pitched versus fresh yeast, the age of your yeast is on the older side, or you have a higher gravity wort. In these cases, adding oxygen can make a difference.

To evaluate this, I brewed a few different batches of beer to test for the presence of these potential issues while evaluating three different aeration techniques. The first technique was a simple process I’ve used for years. While transferring the wort from kettle to fermentor, I let it pass through a strainer and splash down into the fermentor. It’s passive and easy, which is why this is my standard process. 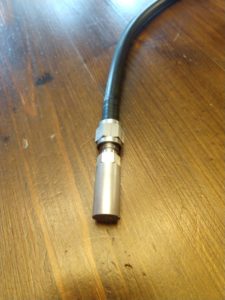 For the second method I still used the strainer (because it’s also how I keep hop debris out of the fermentor), but then I hooked up the Aeration System from MoreBeer. This has an aquarium air pump hooked up to a length of tubing with a 2 micron stone on the end. The air goes through a sanitary air filter on its way to the carbonation stone to filter out contaminants that might’ve been floating in the air. 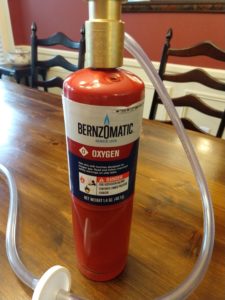 The final method again used the strainer, but then used an oxygen wand. MoreBeer’s OxyWand kit has an adapter to screw onto a disposable oxygen bottle (I found those at Home Depot for about $10), sanitary air filter, and then a 0.5 micron stone. With the OxyWand kit, the stone is attached to a 26” long stainless tube, versus the flexible plastic tubing with the Aeration System. With the smaller holes of the 0.5 micron stone, it disperses the oxygen better in the wort, but can only be used with the pressurized oxygen tanks, not the aquarium air pumps.

Using the OxyWand with its length of stainless tube was easier than the Aeration System with its length of stiff hose that had a permanent curve set into it. With the straight length of steel tube, it was easy to position and leave the stone in the spot desired and let it bubble away. The hose on the Aeration System wasn’t a problem per se, but the more flexible nature of the hose required a bit more attention to get it into the position wanted.

With the aquarium pump, there was the ease of being able to just plug it in and go, and not worry about keeping stock of an Oxygen tank. I was initially concerned that the 5-10 minutes with the air pump would be a hassle for aeration time, but at that point in the process, I had a kettle to clean while it bubbled away. On the flip side, the pure oxygen route was nice to only need a minute and then seal up the fermentor. 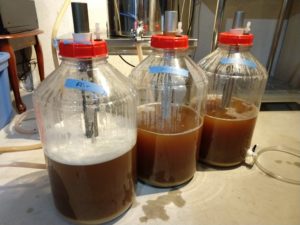 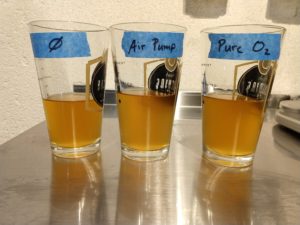 My first simple fermentation was with an Amber Ale with an OG of 1.044 and using White Labs WLP001 California Ale yeast. I split the batch into 3 fermentors and fed each with an equal share of a starter made from the yeast. One fermentor had just my strainer used during wort transfer, the second had the air stone with aquarium pump, and the last had the OxyWand with O2 bottle. I monitored gravity in all 3 with a Tilt hydrometer. All 3 of them hit start of fermentation at the same time, had gravity drop at the same rate, and ended at the same FG. Blind taste testing at the end couldn’t tell a difference. 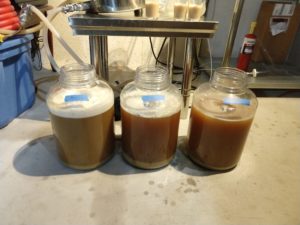 The second simple fermentation was a hoppy Wheat Ale with an OG of 1.056 and I used While Labs WLP008 East Coast Ale yeast. I again split the batch into 3, split the yeast slurry from a yeast starter across them, and had the same aeration of strainer only, stone + air pump, and stone + O2 tank. Again all 3 started fermentation at the same time, finished at the same time, and had the same FG. Blind taste tests again showed no difference.

My third trial was a Black Lager with an OG of 1.066 and I used White Labs WLP801 Czech Budejovice Lager yeast. The yeast was old, 1 month past its “use by” date. This batch was challenging for the yeast due to the age of the yeast, the lager fermentation temperatures, and the higher gravity. I split it into 2 fermentors. Once the wort was at 50F, one was pitched with a yeast from a starter and the other just used the yeast straight into the fermentor- oxygen was added to neither. 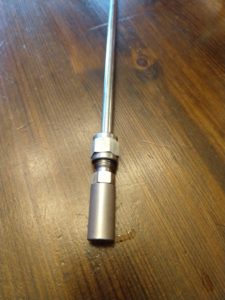 The batch that had yeast with a starter took 22 hours before gravity started to drop. The other batch showed no signs of starting after 4.5 days despite having the fermentation temp raised from 50F up to 62F over that time. I then inserted the OxyWand hooked up to the O2 tank and aerated it for 1 minute. Within 9 hours, it started fermenting and gravity dropped. Had I added the oxygen earlier, I might have been able to get fermentation going without the temperature being so high and generating the harsh flavors I found in that batch.

For the fourth trial, I brewed another lager. This time a bit lighter with an OG of 1.057, and I used Wyeast 2278 Czech Pils yeast. One fermentor got a starter made from a 6 month old yeast pack and was aerated using the OxyWand and O2 tank. The other didn’t get any oxygen, but used a fresher smack pack that was only 4 months old.

Wort aeration isn’t critical for every fermentation. But sometimes you find yourself in a challenging fermentation either by choice (fermenting a lager at 50F) or by accident (you don’t notice the yeast packet from you LHBS is past its good date). In those situations, it’s nice to have this tool in your toolbox. The aquarium pump or O2 tank each have their own pros/cons, depending on each brewer’s individual preference. With some detailed monitoring of a couple lager fermentations, I definitely saw the benefit of aerating my wort better than my trusty strainer method. 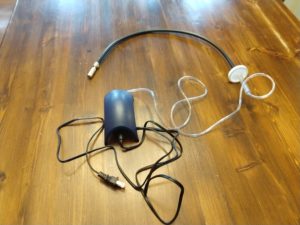 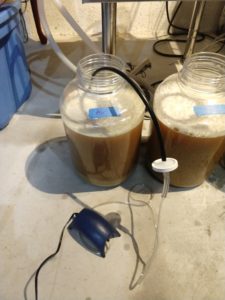 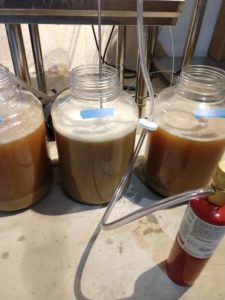 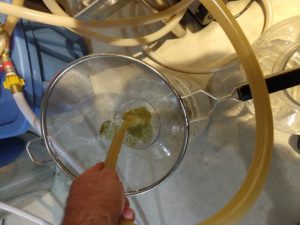 Special Thanks to MoreBeer for providing the equipment used for evaluation in this review.