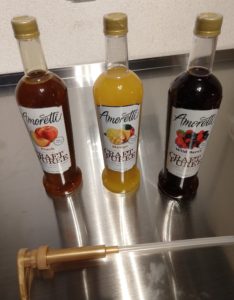 I’ll be upfront and admit I’m not a fruit beer brewer. I do enjoy a few commercially available fruit beers, but it’s more as an occasional change of pace than something I regularly seek out or buy on a regular basis. And it hasn’t been until recently that I’ve actually brewed a fruit beer myself. A friend wanted me to make a Peach Pale Ale, and that was my first foray into brewing one. I didn’t use Amoretti products on that beer, but it’s worth a brief explanation of my experience there, in order to contrast it to my experience with the Amoretti products.

Brewing the peach beer, I didn’t have the option of fresh, delicious tasting peaches to make a beer using fresh fruit. Conceptually, this seems like the ultimate solution, but this can limit your creativity to either time of year, or quality of product substantially. My first experimental batch was using a canned puree product. Thick and “sludgy”, this gave a great mouthfeel and cloudiness, but it had a distinct “dried fruit flavor” to me. It wasn’t as bright and popping as I had wanted.

For the second batch, I did a combination of the same canned puree, but also added some natural flavoring extract I got from my LHBS. That got me more brightness and pop in the flavor, but it also came with hints of alcohol-y flavors, and somewhat artificial aroma. In the end, through working a combination of this canned puree and flavor extract, I got a beer that turned out well, but I didn’t feel either was exactly the perfect tool for fruit beer.

I saw Amoretti fruit purees and thought I’d give them a try to see if they provided a better option. Amoretti set me up with some bottles of their craft puree as well as their artisan natural flavor compounds. Both are advertised as additions to your beers, with concentration recommendations printed on the containers. The craft puree comes in a large bottle with a hand pump like a soap dispenser. Specifically designed for you to either add flavoring in bulk to your whole keg, or just a squirt into your glass before you fill it with beer. To make a sort of fruit-flavored-Radalizer. 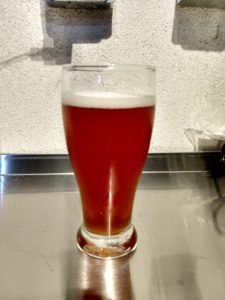 I’m a fan of Short’s Brewing Soft Parade [Clone Kits via Adventures in Homebrewing]. I’m not sure if it’s available outside of our home state of Michigan, but it’s a strong rye beer with a healthy blast of berry fruits. To me, it’s a surprisingly tasty brew that’s a healthy dose of fruit, but you still know you’re drinking a beer. I made a clone/homage strong rye beer and dosed it with Amoretti Wild Berry Puree. It was a first run of a new recipe, and experience shows I usually need about 3 attempts to really hone in on what I want. So it didn’t exactly hit my mark, but I did still learn about the Amoretti puree in the process.

First off, the aroma was superb. Bright and fruity, it left no doubt the beer had a fruit side to it. Aroma was one thing I struggled with on my experience of canned puree for sure, and I found the flavoring extracts to only be slightly better. From a flavor perspective, I found the beer definitely needed at least two weeks to get the flavors to properly blend/meld with the base beer. It’s difficult to pass judgement on the flavoring aspect because this first run beer recipe needed some improvement as it was. I definitely didn’t have the “dried fruit” flavor I found in the LHBS canned puree, and didn’t seem to have the alcohol heat flavor of the flavor extracts I tried in the past. So it seemed to be a good tool to work with for future recipe experimentation. 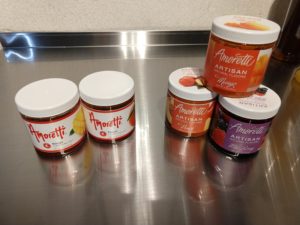 I then wanted to experiment with the Artisan natural flavor compound. It was a thick paste consistency. In the jar it had a great aroma as well. Amoretti advertises this product as another option for beer flavoring as well, but it would take more work to get this blended into your beer and stay in suspension and not precipitate out. However, as luck would have it, at home, we were making some homemade ice cream for a party. I wanted to provide something other than just vanilla, so I took the opportunity to mix in the peach Artisan compound. Now I know it’s not beer, but I can say that it worked wonders on the ice cream. Great flavoring, and made the peach ice cream the definite favorite over the vanilla. For what that’s worth.

I definitely will be going back to the Amoretti puree for future fruit beer experimentation. It’s shown itself to be a great tool and a good product. 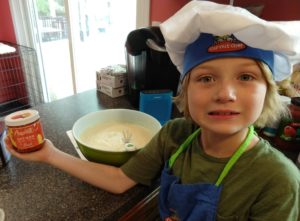 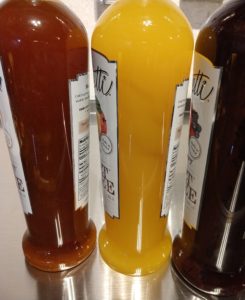 A look at the clear, not-cloudy purees

Special Thanks to Amoretti for for providing the fruit purees and flavorings used for evaluation in this review.