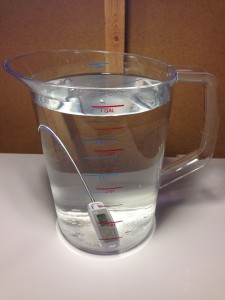 I’ve owned and used ThermoWorks’ Super Fast RT600C as a homebrewing thermometer since 2011.  It’s very accurate, has a super fast response time and has a great set of features.  Because of my work on Homebrew Finds, I have a large number of thermometers.  I propose that, considering it’s price point, the RT600C is one of the best thermometers available for homebrewing.

The Thermometer along with the included Pocket Clip. 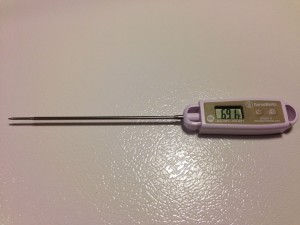 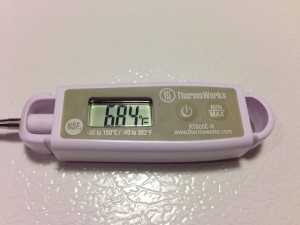 Close up of the face.  You can see the NSF certification along with power and min/max buttons. 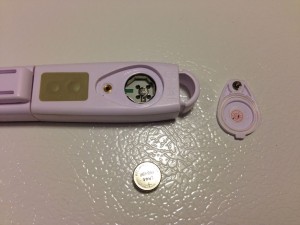 Back of the thermometer disassembled.  The left panel includes both a deg C/deg F mode button and a reset button. 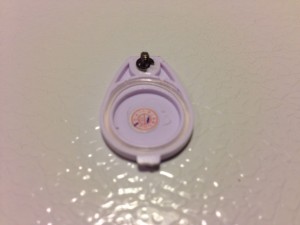 The battery door includes and o-ring

The RT600C is waterproof.  Not just splash proof or “kind of waterproof”, it’s waterproof.  IP65 rated to be exact.  That means you can put this in a dishwasher – up to 190 deg F.  To illustrate I’ve submerged it in my trusty Rubbermaid Commercial Brew Day Pitcher [Review] 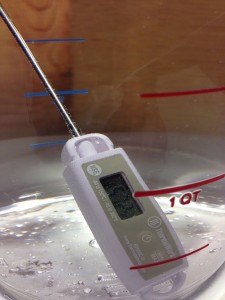 Close up of the submerged RT600C 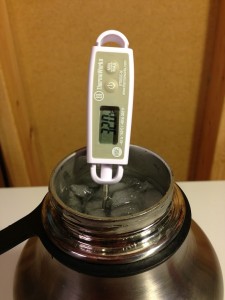 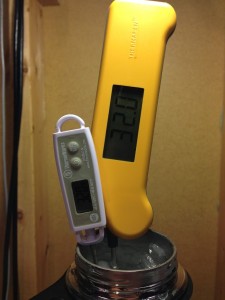 Still 32 deg F, side by side with my ThermoWorks Thermapen [Review] 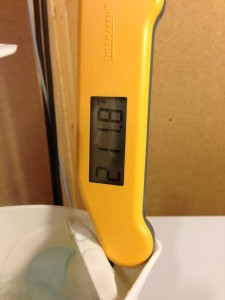 I’ve experienced different boiling temperature on different days using the same equipment and testing methods.  Boiling temperature is a moving target.  It is based on elevation and atmospheric conditions.  The day of this test, boiling point was a consistent 211.8 deg F as read by my highly accurate Thermapen. 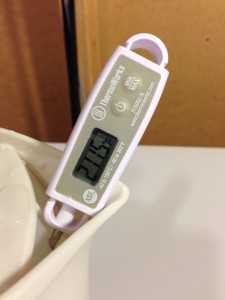 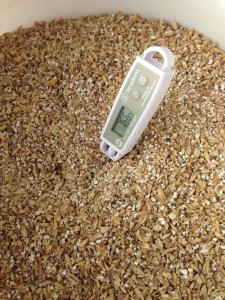 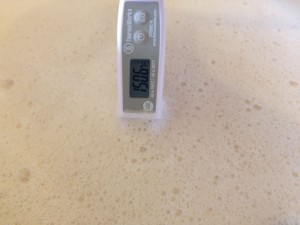 Auto Shut Off (now included)…
In the original version of this review I noted that the RT600C does not have an auto off feature.  Not a huge deal if your version (like mine) doesn’t have auto off.  What you can do is… shut it off :).  If you do forget, the batteries are relatively inexpensive.  Update: ThermoWorks has changed the design.  The RT600C now includes and auto-off feature.  If for some reason you wanted a version that has no auto off, that’s found in the RT600B.  That one stays on like the RT600C used to.  Not very helpful for homebrewers.  I think that’s generally used by food service professionals trying to test dishwasher temperatures and such.

Some of the RT600C’s features:

I purchased my RT600C back in October of 2011.  As of this update (September 2015) the same unit continues to be an amazing thermometer.

With years of practical use in homebrewing and beyond, I can recommend the RT600C as a great homebrewing thermometer.  Considering the features, performance and cost, this is arguably one of the best values for your money.