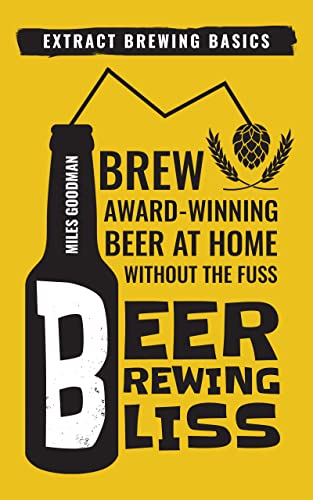 There’s only one thing more rewarding than a top-quality craft beer on a summer’s day… that’s cracking open one you’ve brewed yourself!

Over 1 million Americans are already brewing their own beer, and there are many reasons you might want to join them.
If you’ve ever suffered a headache after drinking just a small amount of commercially produced beer, you’ll know first-hand the harsh effects of excess chemicals added during production.

The advantage of brewing your own is complete control over what you put in. Carefully controlling the ingredients means you can work around any intolerances whilst side-stepping any potentially nasty chemicals. This way, you create the perfect beer for you.

But by far, the most appealing aspect of homebrewing for most is the fact that you can share your creations with family and friends.

There’s nothing more satisfying than handing out your first batch of homebrew and watching your friends nod in satisfaction, knowing there’s plenty more where that came from.

Being new to brewing and with the many award-winning craft beers on the market, you might be asking yourself if you’re able to compete.

Don’t panic. Beer Brewing Bliss: Extract Brewing Basics is the first instalment of a two-part book series that will guide you from novice to brewing master. Start here with the basics of extract brewing, then move on to all-grain brewing in Beer Brewing Bliss: All-Grain Brewing Mastery.

In Beer Brewing Bliss: Extract Brewing Basics, you’ll find everything you need to know to get your journey off on the right foot… and get your first beers brewed to perfection. Inside, you’ll discover:
The crucial differences between extract brewing and all-grain brewing (you’ll need to know this if you’re considering purchasing a home brewing kit)
A comprehensive guide to choosing exactly the right brewing equipment for your current and future needs (including price guidelines)
A crisp and straightforward guide on how to properly sanitise your equipment
The careful process of turning water into wort
A clear understanding of how the most common base malts, speciality malts, and hops add the bulk of the flavour to your creation.
The role of yeast during fermentation (and why you shouldn’t just leave your brew)
How to effectively prime your beer without exploding bottles
Your role in the beer brewing process and the crucial steps you don’t want to skip (no matter how tempting it may seem!)
My top 10 tips for making sure your beer is not just adequate… but sensational
And much more.

Suppose you’ve always fancied yourself as a homebrewer but worry that you’ll never produce something as tasty as the award-winning brewers. If that’s the case, it’s time to take stock.

Every professional brewer began with a single batch… And who knows? Perhaps the next award-winning brew could be lovingly crafted in your own garage….

Also: Save on Seasonal Homebrew Recipes… All Grain & Extract