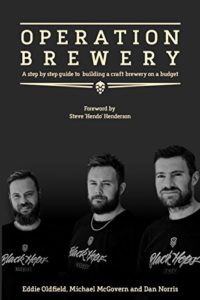 In July of 2014, Dan, Eddie, and Govs sat at a bar talking shit about making beer. Two years later, they’d opened their own brewery on the Gold Coast in Australia called Black Hops. It’s been an epic journey, from “the little situation” in China, to a collaboration with the biggest entertainment franchise on earth, and finally—launching a brewery. Operation Brewery tells their story and gives you every last detail on how to build your own brewery on a budget.

Most brewing books focus on how to make a good beer. To start a brewery in 2016 and beyond, it’s no longer enough to make good beer. Any business is as much about planning and marketing as it is about the product you make. Operation Brewery delves into how Black Hops navigated the tricky waters of opening a brewery and also provides specific advice on a range of startup topics such as:

Operation Brewery: Black Hops – The Least Covert Operation in Brewing: A step-by-step guide to building a brewery on a budget Kindle Edition