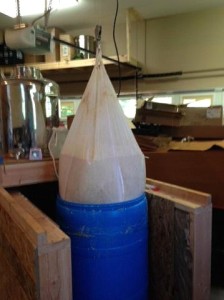 by Rex Slagel – from www.brewinabag.com – read more about Rex below

Because the brew in a bag process is still fairly new in the USA, there is still some confusion about how to use a fabric filter in the brewing process. Some folks still call it a “method”, as if the resulting product is different than when employing a sparge to wash sugar from grain, and they also suggest its use for only single kettle BIAB, but it is currently being used by sparge brewer’s as well.

Essentially, the fabric replaces the grain bed as the filter and that alone allows many steps of the process to be modified – with the same (or better) results as traditional three vessel sparge set ups. The filter also eliminates the need for a manifold, false bottom, or braided cord. When we acknowledge the capability and apply it to filtering wort, it’s easy to understand the operational advantages of using a fabric filter.

Most writers explain that the advantages us using a bag include lower equipment expense and time savings, but that the drawbacks are lower efficiency, cloudier wort, a messy bag of grain, and the need for a larger kettle or mash tun. They also say “if you’re on a tight budget, you can still make good beer with minimal equipment”, which implies that in order to “really brew” you need to spend additional money for more equipment.

But in most of these articles, what is not generally conveyed, relative to conversion, extraction, and transfer of wort, is that there are some significant advantages compared to three vessel sparge home brewing, but that topic is another article.

This article is aimed at the sources of authority in the industry that, through lack of understanding or perhaps time to edit existing information, perpetuate misconceptions associated with using a fabric filter.

If you do some light research on the subject of “brew in a bag” and “efficiency” you can find plenty of websites that contain false statements. I’ll say in advance that I believe these articles were written using information understood to be accurate and that no one purposely set out to mislead the reader.

However, now that we have a greater understanding of how to use the bag, and proven results that contradict these writings, simple modifications to these articles should be administered. I’ll also say that I’m in favor of brewer’s doing things their way – that’s one of the inherent philosophies of home brewing! But, for those just getting into brewing, having bad information at the start is frustrating and wasteful, and bad information does not allow accurate comparison of pertinent factors.

There is inaccurate information in a number of articles on the internet, but for the sake of concise responses, and because the AHA article has more information than others, it also contains the most contradictions in one piece, I’ll use it as a reference when stating the facts we now know about using a fabric filter (or brew in a bag). The numbers beginning each point are indicative of the placement in the AHA article.

Just to be clear, this article is not meant to be derogatory and is is not aimed at the AHA. I’m a big fan of the organization. They have helped advance homebrewing in a professional consistent manner and lead the way as an information resource.

The following bold text is directly from the AHA’s pdf article on BIAB. My comments follow.

1. “Because of the simplicity of the process and equipment, BIAB has become a popular means of all-grain brewing for homebrewers new to mashing, living in small confines, pinching pennies, or brewing small batches.” ( true – but there are brewers using a fabric filter in fifty-five gallon barrels as well. Better stated “…for homebrewers of nearly any batch volume.”

2.“The ideal BIAB bag will be able to fit around the circumference of the boil kettle ***while not resting on the bottom to prevent scorching and will retain most of the grain sediment so as not to have too many solids left for the boil.” ( Sizing statement regarding circumference is correct, but “not resting on the bottom to prevent scorching” is not correct using confirmed procedures. There is a myth that maintaining exact mash temp for the entirety of the mash is critical for the homebrewer and the language “scorching” implies the need to fire up with the bag in the kettle to maintain temperature.

When properly insulated the kettle mash temperature will only drop about 2º over 60 minutes – which equates to about half a degree every fifteen minutes – and we all know that the majority of conversion occurs inside of thirty minutes, and if the mash is within conversion temp range this loss is inconsequential. Secondly, the bag will not melt [HBF editorial note – Rex is speaking specifically of The Brew Bag] or scorch at boiling temps – however, when firing up with the bag full of grain in place, the space between the bag and the bottom superheats and causes the sugars and the material to burn. You can watch a short video here of the material being held to the bottom of a pan while it’s on the flame boiling. Thirdly, the openings in Voile (the most commonly used material for bags) are ~ .0083” – while grain mills are set between .020 and .045 – so grain sediment in the boil is null.

3. “Squeezing is not recommended.” ( actually totally not true. Another myth is that squeezing the mash bag will extract tannins and also make the wort cloudy. Squeezing the bag of grain and tannins are not synonymous. Excerpted and paraphrased from the books “Water – A Comprehensive Guide for Brewers” and “Malt – A Practical Guide From Field to Brewhouse”: Tannins, a subset of polyphenols, are present in grain husks and cell walls. They are released at mash temps and bind with proteins to form haze. In conjunction with a pH above 6, excess tannins are extracted and impart an astringent flavor – they cannot be produced by pressure.

4. “One of the biggest downsides to brew in a bag is the efficiency compared to fly or batch sparging in a mash tun. It is not uncommon to have efficiencies in the 50-60 percentile.” ( again, totally not true, although, not mashing at proper WTGR (Water to Grain Ratio) or over-sparging will produce low numbers, but that’s the case with any method. They do offer offer some hope for other brewer’s following the above sentence. “That being said, many BIABers are achieving efficiencies comparable to the traditional forms of mashing in the 70-80 percentile.”

5. “Run your grains through the mill twice.” ( of little value unless the mill is adjusted down, and if the mill is adjustable, why not just lower the setting and run once. You can confirm this information by listening to or reading from a presentation at the AHA in 2014 by Jennifer Helber here.

6. “Increase mash rest duration. Some homebrewers have found longer mash durations allow for more conversion and ultimately higher efficiency.” ( conversion is a finite process, and as stated the same logic applies to any mash not just BIAB. Duration of the mash does impact conversion – but only to the degree that there is available starch to convert. Regarding higher efficiency, what generally happens is the brewer does not test conversion at regular intervals and does not control the results. So they may have a low reading on a brew and then the next brew using different grains, WTGR, and temperature – they rest longer, see an improvement and then state that a longer mash time produced higher conversion. For more infomation on this subject you can go to Braukaiser.com

Remember that when using the grain bed as the filter and any other type of pick up or manifold the opportunity for a stuck sparge exists. When using a fabric filter – you’re using a true filter, so there is no need to “set the bed” with a coarse grind and there is no thought of a stuck sparge. Before the fabric filter, brewing processes were built around the avoidance of the stuck sparge and could not be optimized for efficiency!

8. “Calculate recipes with a lower expected efficiency. This will allow an increased grain bill to make up for any shortcomings due to low efficiency.” ( not true, in fact the opposite is true, but your processes will determine the outcome for your system. But you can count on a finer grist aiding conversion and efficiency. I have personally experienced lower grain bills and higher efficiencies, many in the upper 80’s and one in the low 90’s.

Also from Rex: Brew In a Bag – Bag Material – Does it Matter?

About the author: Rex Slagel is the founding member of Brew In A Bag Supplies LLC. in Plainfield, IL which manufactures The Brew Bag®. He has brewed over one hundred batches, including over sixty using a fabric filter. He can be reached at rex@brewinabag.com

23 thoughts on “Guest Post: Dispelling Brew in a Bag Misconceptions”