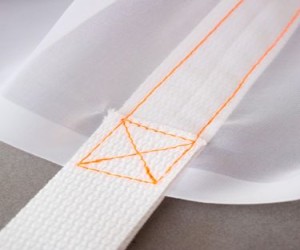 Special Thanks to Rex Slagel for this Guest Post!  Read more about Rex below

So you’re either itching to move to all grain but either don’t have the budget, space, or you just don’t want to spend $750 to $1,500 on three vessel (3V) set up. Maybe you just brewed with a buddy on your 3V system while he brewed using a fabric filter aka – brew in a bag – and he was having a homebrew while you were adding your first hop additions, or you used to brew and then life happened so those six hour brew days are just not possible anymore…but you still want to brew! Using a fabric filter solves all those issues. But, can it really be that simple, is the beer worth drinking, and what type of bag should I use?

I’ll first say that there have been many brewing competitions won using a fabric filter. In fact the 2014 AHA home brewer of the year Robert Helferding now brews exclusively using this method. Here’s what he said about it:

“I started BIAB about a year ago and am a huge fan and advocate of the brewing method. The only weak spot I found was the bag itself. The Brew Bag® is my fifth purchased bag in less than a year — others were not fine enough, didn’t last past a few brews or were cheaply made and fell apart. My wife had made a bag that was pretty darn good… but did not have webbing handles and had to be lifted with a strainer from the brew kettle. She said a new sewing machine would help… I brewed a batch of Porter using the same recipe I have used for BIAB before. I milled the grain at .30 instead of .37 to test if the bag was going to work for me. At the end of the brew my OG was .06 points higher! Good clean wort and easy as a breeze to lift it out. I use a block and tackle suspended over the pot to remove the bag. If you are just getting into all-grain I urge you to start with Brew in a Bag. If you are already brewing in a 2 or 3-vessel system, give BIAB a try. Less work, less cleanup, and less time in the brew day.”

Because it impacts efficiency, clarity, draining properties, and longevity, let’s talk about the fabric used by BIAB brewers. You’ve heard of guys using paint strainers, panty hose, and muslin bags like you get in the extract kits. While these do strain the mash, they each have a major flaw that is based on the fiber used – but using them to strain wort still results in beer.

Paint strainers are made of nylon, which is fine except that the threads per inch (TPI) is only 35 or so, and that lets a lot of husk pass through to the wort. They are also very easy to tear and are not made to fit every kettle so the bag can constrict the grain and impede the water to grain (WTGR) contact and thus conversion time. 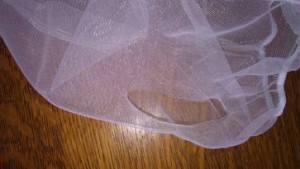 Panty hose – well just panty hose. Made of nylon and spandex the material stretches, is easily torn and just can’t hold much grain. That’s all I have to say.

Muslin is cotton and will work a few times, but because cotton is “hairy” (see photo) it absorbs and retains the grain bits, cannot be cleaned well and is prone to bacterial growth. It also degrades when exposed to moisture and cannot be used as a hop bag. 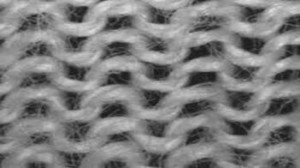 So what material is food safe, woven fine enough to strain grain husk, can withstand boiling, is very strong, “slick” so it cleans easily and does not harbor bacteria, does not absorb water, and can be used over and over? It’s called Voile – a multi or monofilament polyester used in all manner of applications. It is commonly found in fabric stores and is generally less than $5 per yard. Many home brewers buy Voile curtains to make bags…and it works!

The photo below is Voile magnified so you can compare cotton fibers to polyester fibers. Notice the lack of loose fibers on the Voile and how uniform the openings are. Nylon, like polyester is also an extruded fiber and would look similar under a microscope, but because it is more elastic than Voile it is not a good choice for a brew bag, particularly for heavy grain bills. 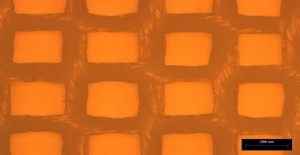 This is a close-up of Voile as used in a brew bag. The strapping is added to aid lifting and transfer part of the weight of the grain off the material.

So why does fabric composition matter? When mashing the primary objective is to move the wort from the mash tun to the boil kettle, so when the flow rate out of the tun is high the wort (sugar water) moves with less friction across the grain and out of the bag. And a bag provides more surface area for filtering. Using a fabric that not only filters well but also allows sufficient drainage to carry the sugar is of great benefit.

This “less friction” logic is the primary reason for the 170º mash out / sparge, but some folk’s say its primary purpose is to set the sugar profile by denaturing the enzymes – and it does that. But high-temp sparging or mashing out occurs AFTER the majority of conversion has taken place, so in the thirty to sixty minutes it typically takes to sparge, there are not enough enzymes left, or starch to act on that could change the sugar profile to any noticeable degree. And because of the highly controlled modification (malting) process of the grains we use today, except in cases of raw or non-modified grain, this eliminates the need for a step-mash or a mash out.

When using a fabric filter and full mash volume, the pre-boil sugar profile (gravity) can easily be confirmed with a refractometer, but that won’t work for a 3V sparge brewer because the pre-boil gravity is not determined until the diluted volume in the kettle is reached. 3V mash tun gravity can be measured and conversion confirmed complete, but because the tun gravity measurement is different than the kettle gravity, the process is not controlled and thus confirmation of the sugar profile is inaccurate.

So if the above information is true, why the 170º mash out? Lot’s of 3V brewers do it to raise the viscosity of the wort so it moves through the grain bed with less restriction – hotter = thinner.

This brings us back to bag composition and out-flow rate. Just like a thin mash and typical 3V pick up and a wide open ball valve, a bag that has too few TPI will not filter the grain husks out of the wort, so clarity is affected. This can cure itself via time and temperature, but if you can eliminate the husk, why not?

And like a thick 3V mash, a bag that has too many TPI will restrict flow, impact efficiency, and take a long time to drain. We’re looking for the Goldilocks of brew bag material – and that’s Voile. The fabric has fairly uniform openings (as in the photo) of ~210 micron = to  #70 wire mesh and is very durable.  Most grain mills are set between .030” and .045” while the holes in the bag are 210 micron or.0083”, so the grain husks and chunks are left behind in the bag as the wort flows through the holes in the fabric. We can conclude that choice of fabric for filtering wort does matter.

So when you’re thinking you’d like to get back into brewing, or save some time and money, do a bit of research on using a fabric filter. It’s just not for BIAB anymore!

About the author: Rex Slagel is the founding member of Brew In A Bag Supplies LLC. in Plainfield, IL which manufactures The Brew Bag®. He has brewed over one hundred batches, including over fifty using a fabric filter. As of this writing The Brew Bag® is being used by brewers in seventeen countries and is also used by the nation’s largest cold-brewed coffee brewer. He can be reached at rex@brewinabag.com

The Brew Bag is a Made in the USA, purpose designed BIAB bag.  It has four loops for lifting the bag out of your kettle, every seam is reinforced for long life and it is available in a number of sizes for kettles, keggles and coolers.  If they don’t carry the size you want, The Brew Bag will custom make it for you.

I use The Brew Bag myself and it works very well. Check out my Hands on Review.

Hands On Review: The Brew Bag – Purpose Made BIAB

My Review of The Brew Bag