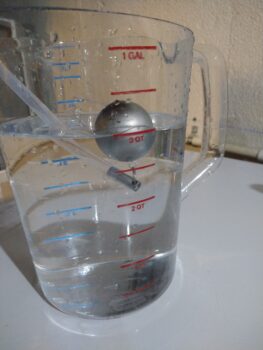 In the world of continuous improvement, you’ll find changes to things that you didn’t think needed improvement. If they’re good improvements, they’ll change how you use it. The floating dip tube was one of those unexpected changes to the simple homebrew keg. The keg has so few pieces to it, and has such a simple job. It’s surprising that they took something as boring as a metal tube and found something creative and new to do with it. 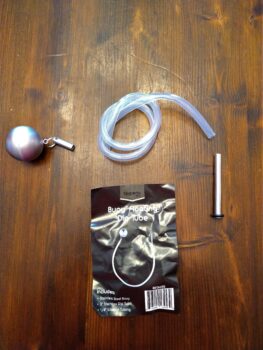 The dip tube is the passageway for the beer from inside the keg to outside. The standard dip tube is all about being in the right position at the end of the beer- at the bottom to get the last drop of beer out. The floating dip tube turns that upside down and instead of being at the bottom the whole time, sits at the top of the beer as the level continuously changes. The rigid steel tube is replaced by flexible silicone tubing with the open end attached to a stainless float ball. The float then sits on the top of the beer, and as the beer level goes down, the float of course goes with it, and the tubing allows you to pull beer whether the keg is at its fullest or at its lowest.

The Torpedo Keg Buoy Floating Dip Tube starts with a short 2” tube. This tube goes into the keg with the same interface as a regular dip tube with a flared end and an o-ring that gets compressed when you screw down the keg post. Once that’s installed, you attach the 23.5” long silicone tubing from inside the keg. Lastly, the float has a short 1” length of stainless tube attached to it with a ring. The silicone tubing then slides over this short stainless tube to complete the setup. With this configuration, it pulls beer from the top, while the precipitate sinks down below it to the bottom of the keg. 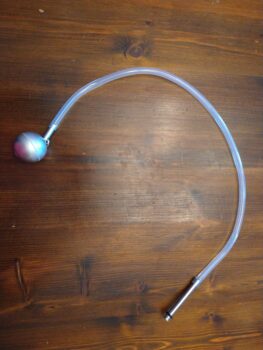 I had two trials in mind for the dip tube. The first was to use it in a regular serving keg, just swapping out the standard/fixed dip tube with the Torpedo Keg Buoy Floating Dip Tube. Everything went together fine. Pro tip: be sure to follow the well-known trick of soaking the ends of the silicone tubing in some hot water for a bit before slipping them on over the metal tubes. 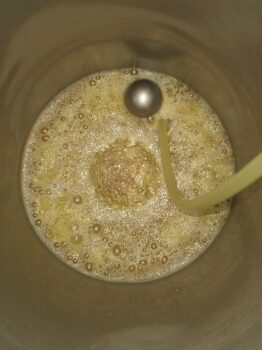 I brewed a big batch of Rye IPA that had a lot of hops in the boil (just under 9.5 oz of pellets per 5-gallon batch), and good amount of dry hops (3 oz of pellets per 5-gallon batch). I brewed just over 10 gallons and then split it between 2 fermentors. After fermentation, the beer from the first fermentor went into a keg with a standard dip tube, and the second one went into a keg with the floating dip tube. To really test how well the float kept sediment out of the poured beer, I skipped my typical cold crash step and just went directly from fermentor to keg. I also skipped the inline Bouncer filter while transferring out of the fermentor, which is another typical process I use to minimize debris in my serving kegs. As a testament to how chunky this beer was, I had to stop multiple times while transferring, because the keg post would get clogged with hop debris. 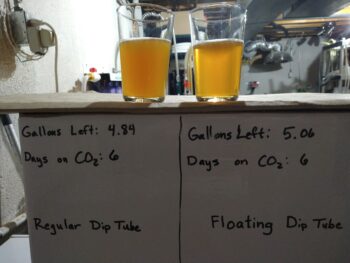 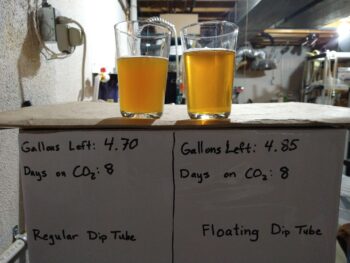 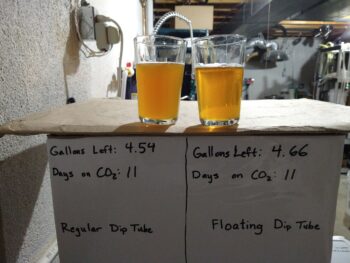 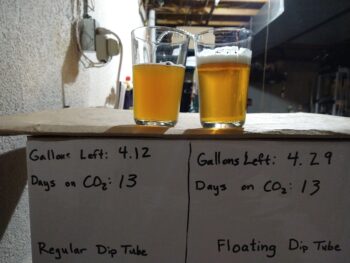 As the trial was underway, I poured beers from each keg and took pictures of beer clarity. I used my Plaato Keg Management System – Hands on Review –  scales to keep track of how much beer was in each keg as well. The difference in beer clarity was striking. I believed the principle would work, but I had no idea how quickly I could get clear beer out of the keg with the floating dip tube. I don’t burst carb my kegs, I use the “set it and forget it” method. But when I saw how quickly the beer cleared with the floating tube, it seemed like something burst carbonators would like. You could have clear beer and carbonated beer within a few days. It even cleared so fast that by the time I poured the first sample at 6 days, it was already noticeably cleared. The keg with the regular dip tube had visible flecks of yellow-green hop debris I could see from the bottom of my glass. These bits were visible from the regular dip tube all the way through the first 1-1.5 gallons of beer. The floating dip tube didn’t have any visible debris until I was down to the last 1/2 gallon of the keg.

The other trial I did with the floating dip tube was to use it in a keg specifically designated for cold crashing. I fermented the beer in my fermentor until my Tilt told me that fermentation was finished. I then transferred from fermentor into the keg that had been purged of oxygen. I stuck that keg into my keezer, and let it sit at 35F for 3 days before transferring to my serving keg. Since kegs have easy ways to purge them of oxygen and do closed transfers, it minimized oxidation risk like you might see with using a secondary. The pressure capability of kegs means no fancy balloon airlock needed when cold crashing. And lastly, their dimensions are friendly for stashing in your keezer. 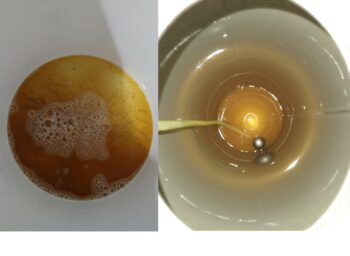 The floating dip tube in the cold crash keg was the perfect combination. With the precipitate dropping out to the bottom, when I went to transfer to my serving keg, the float kept pulling clear beer. As soon as I got any indication of cloudy beer in the line, I shut down the transfer. This worked great in my trials, with a good slurry of yeast & hop debris in a puddle of beer that was left behind. 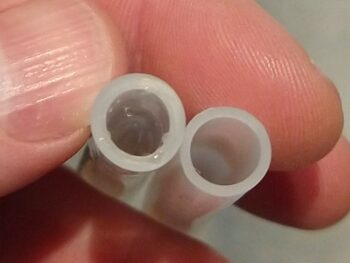 There was one phenomenon with the flexible dip tube I had to do a bit of work to overcome. The tubing that came with it was a bit stiff. I found that when doing long pours (filling a growler or pushing a keg full of Star San solution out with CO2) the tube created enough force to pin itself against the opposite wall of the keg and get stuck. When stuck, the end would stick above the beer level and start sucking in CO2 and blowing out foam. I purchased some thin wall silicone tubing from Amazon (7mm ID x 9mm OD) that was more flexible. This was much improved for these long pour events. If I did get any rare occurrences of it blowing foam, I simply shut off the flow of beer. This created an inertia shockwave in the tubing that was sufficient to reset things inside the keg and get the tubing back under the beer level. So if you run into this issue and it doesn’t right itself by simply shutting off the tap and starting up again, you can either give the keg a bump, or get some of this tubing and swap it out.

Overall, I found benefits of the floating dip tube in a couple of different uses. For those that want to serve from their keg soon after kegging (burst carbing and/or fermenting & serving in keg), the float helps get you to clear serving beer quickly. And if you want to rig up a cold crash keg, it’s a logical combination as the beer you transfer out will be pulled from above any of the sediment that drops down during cold crashing. Another tool in your toolbox. 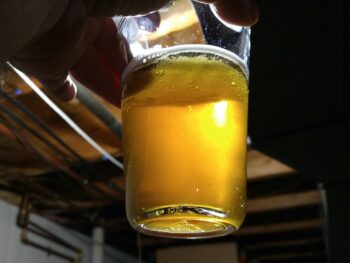 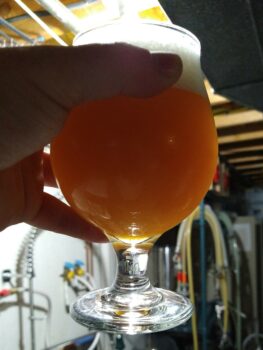 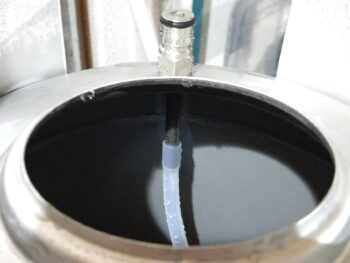 Position of Tube Inside Keg 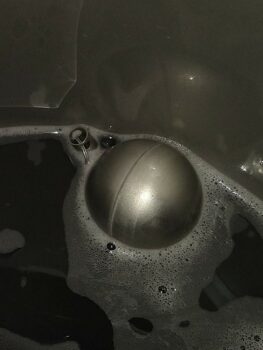 Sticking to Side Wall from Stiff Tubing

Make sure the components you use are compatible and rated for your intended application.  Contact manufacturer with questions about suitability or a specific application.  Always read and follow manufacturer directions.  review:b3buoy tag:tpr