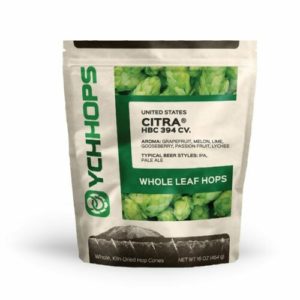 One of the most widely used hops in commercial, craft, and home brews, the Citra hop packs a pungent flavor that has been used in in many beer styles. Bred from four different hops including East Kent Golding and US Tettnang and released in 2007, this hop provides high levels of both alpha acids and oils. These characteristics lend Citra hops to both bittering and aromatic uses, most commonly found in styles like IPAs and Pales Ales.

Bright orange, grapefruit, lemon and other wonderfully tropical fruit flavors create an aroma that is totally unique to this popular hop. An alpha acid range from about 11% to 13% provides the perfect bittering agent in in a boil, and lets aroma shine through when dry hopped. Combining Citra hops in whole or pellet form with other fruity varietals like Simcoe and Mosaic works well, while these can also be substitutions for Citra. Test out this fruity flavor yourself in commercial brews like Citra Single Hop Imperial IPA from Flying Dog Brewery, and see how it goes down when dry hopped in Sierra Nevada’s Torpedo IPA.

All hops are packaged in oxygen, light and moisture barrier bags. They are purged with nitrogen and stored cold to optimize freshness. Resealable packages feature a tear notch and zipper.

Additional Information
Developed by the Hop Breeding Company and released in 2007.

General Trade Perception
One of the most popular new varieties, known for its intense flavor and aroma characteristics

As if this posting, this is eBay offering is selling for just $29.99. Shipping is also free to many US addresses.