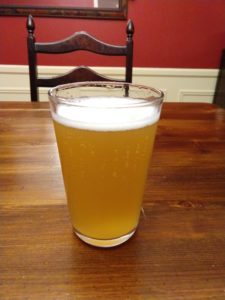 Lunar Shock is an American Wheat ale, with orange peel and coriander added. It pays homage to Blue Moon and Shock Top, and that’s where it also draws inspiration for the name. It’s an easy-drinking beer that will appeal to the macro-beer drinkers that come to your party.

This comes in an extract version and an all-grain version. The all-grain kit can come with grain either crushed or non-crushed. I opted for un-milled grains, as I like to crush my own to have control of the grain crush.

The malts were packaged in pre-measured bags of 5 lb and 1 lb increments, from Viking Malts. Therefore it was easy to cross-reference to the recipe card to confirm I got the right amounts of everything. The hops came in light-proof, thick bags, where the hops were nitrogen flushed before bagging. The recipe kits from MoreBeer don’t come with a specific yeast, instead they give you a list of yeast recommendations from the different yeast vendors they carry (White Labs, Wyeast, Gigayeast, Imperial, and Omega). I hadn’t used Gigayeast before, so I opted for the GY001 – Norcal #1. Gigayeast packages contain 200 billion yeast cells, which they say can be used as a straight pitch without a starter to ferment 5 gallons of wort up to 1.070 gravity (if pitched within 3 months of the date on the pouch). I received it 1.5 months after production date, and brewed at just under 2.5 months after production date, so I skipped the starter. That was a nice time saver. The yeast came inside a foil-lined bubble wrap padded envelope with an ice pack. Things were still cool inside after a FedEx shipment from PA to MI- not cold, but sufficient. In addition to the ingredients, there was a recipe card with basic brewing directions, a cut-out shape to go with the MoreBeer custom tap handle, and a sheet of basic brewing process tips. 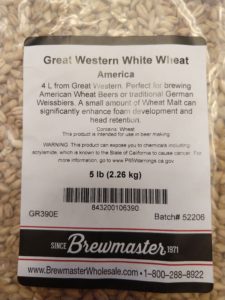 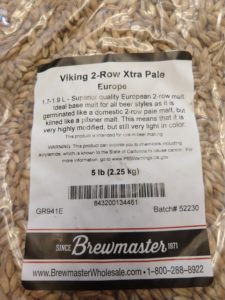 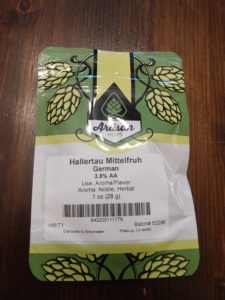 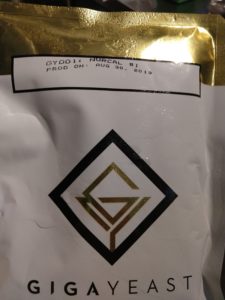 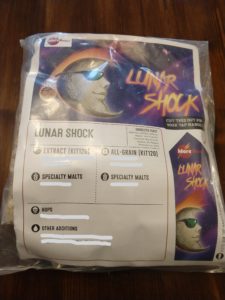 Get Current Pricing, Lunar Shock via MoreBeer, Review Continues Below

The recipe directions were very general. For example, they gave mash temperature, but didn’t specify a mash time. For seasoned brewers, this is a welcome flexibility, since we all have our particular opinions on certain process details. For newbies, this might mean a little outside research is required, which could be a good learning experience anyway. I did a single-step mash with a mashout, and adjusted water with brewing salts to match my personal preferred water profile and some lactic acid to adjust the pH. I ended up with a measured pH of 5.07 in the mash, which was lower than targeted, but still within the rule of thumb 5.1 – 5.5, measured when cooled to room temperature. The hops went in for the full 60 minute boil, and the orange peel and coriander went in for the last 10 minutes of the boil. 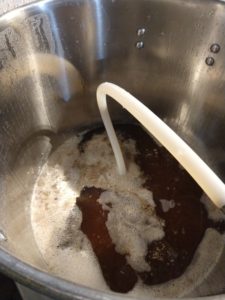 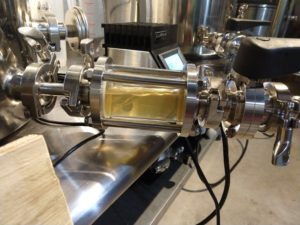 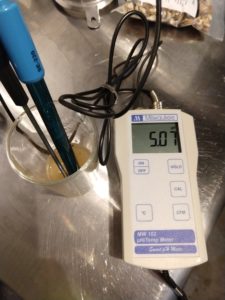 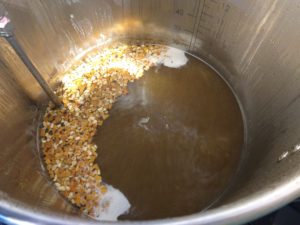 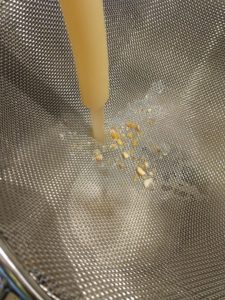 Fermentation was a fairly quick start, with signs of gravity dropping (monitored via Tilt Bluetooth hydrometer) within 9 hours after pitching. I fermented at 68F for about 3 days, when I noticed the rate of gravity drop starting to slow, so I started stepping up the temperature gradually over the following 2 days. I then sat at 72F until fermentation activity seemed to stop at 6.5 days after yeast pitch. At 9.5 days after yeast pitch, I transferred to a keg to cold crash. After 3 days of cold crashing, I transferred to the serving keg. To minimize oxygen pickup during this phase, the beer sat with a head of CO2 pressure in the keg during cold crash, and transfers were done using a Northern Brewer anti-gravity diaphragm pump into kegs that had been purged of air by filling first with StarSan + water completely, and then the StarSan solution pushed out by CO2. It finished fermentation with an ABV of 5.8% and FG of 1.012, with a yeast attenuation of just under 78%. 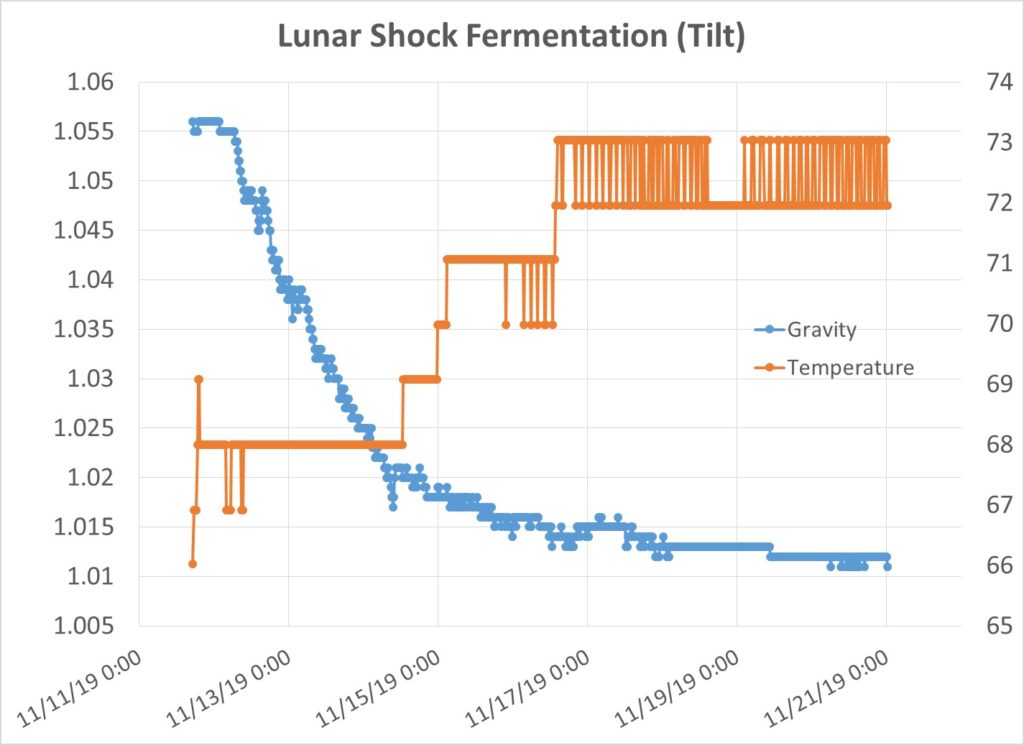 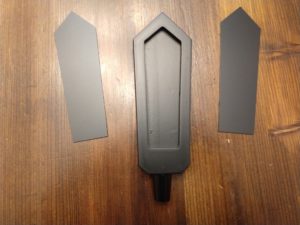 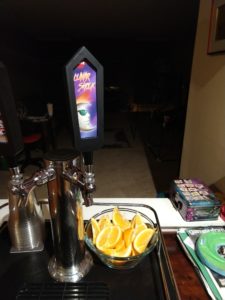 The color of the beer was great- a bright yellowish-orange with haze. With very little hops, there was no real perceived hop flavor or aroma, and the minimal bittering additions served only to give it ever so small of a bite so you didn’t feel like you were just drinking flavored water. There was a faint orange aroma, which was followed up with an orange-flavored burst that greeted your first taste. Overall it struck a balance between a full mouthfeel wheat ale and a solid orangey tartness. I served this beer at a party, alongside another MoreBeer recipe- their hazy pale ale. The crowd generally split into two preference groups, with half of the people preferring the Lunar Shock over the hazy pale ale. Those in the Lunar Shock camp were those that, generally speaking, typically drank macro brews. So, depending on your crowd, this beer could be a good gateway for your friends/neighbors that you typically wouldn’t expect to be drinking homebrew. I had people tell me that they don’t drink beer much, but they really enjoyed it. For me personally, it wasn’t one that I’d be making for myself, but for a party with diverse beer palates, this could cater to the macro brew drinkers and get them drinking homebrew. 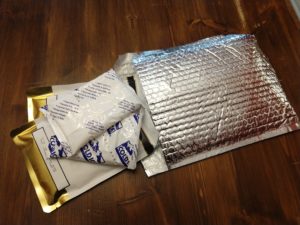