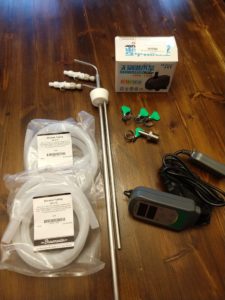 All yeasts- ale or lager- have a temperature range that produce the most desirable flavor traits. And even within that target range, there are specific characteristics that get coaxed out when you’re at the top versus the bottom of that range. So when you get a recipe dialed in to your liking, being able to ferment at a specific temperature is a big deal. It’s the difference between simply making a good beer, and making the specific beer you want. 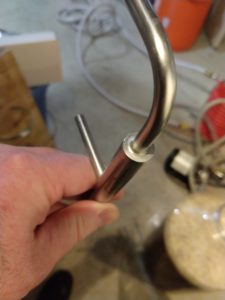 The hollow rod is made of stainless steel, and it has another smaller pipe welded inside of it. A hose connects to one end to let the flow of cooling water in, and then a hose connects to the other, to take cooling water out. The cooling water used is generally a cooler filled with ice water, which you have to provide yourself. As this ice-cold water passes through, it draws heat from the fermenting wort, and then carries it out. The Complete Kit – See: CoolStix Lineup -, sold by MoreBeer, also includes the pump, hoses, connections, and a standard Inkbird ITC-308 controller to get it to work as a system. This leaves you to just provide your own ice water bath. 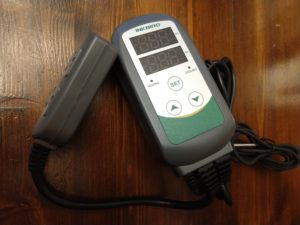 The connections between hose and cooling rod are slick. They are self-sealing quick disconnects. To connect, you simply push them on and they snap connected. When it comes time to disconnect, you push down on a small metal tab and they pop off, sealing themselves so you don’t leak any cooling water. 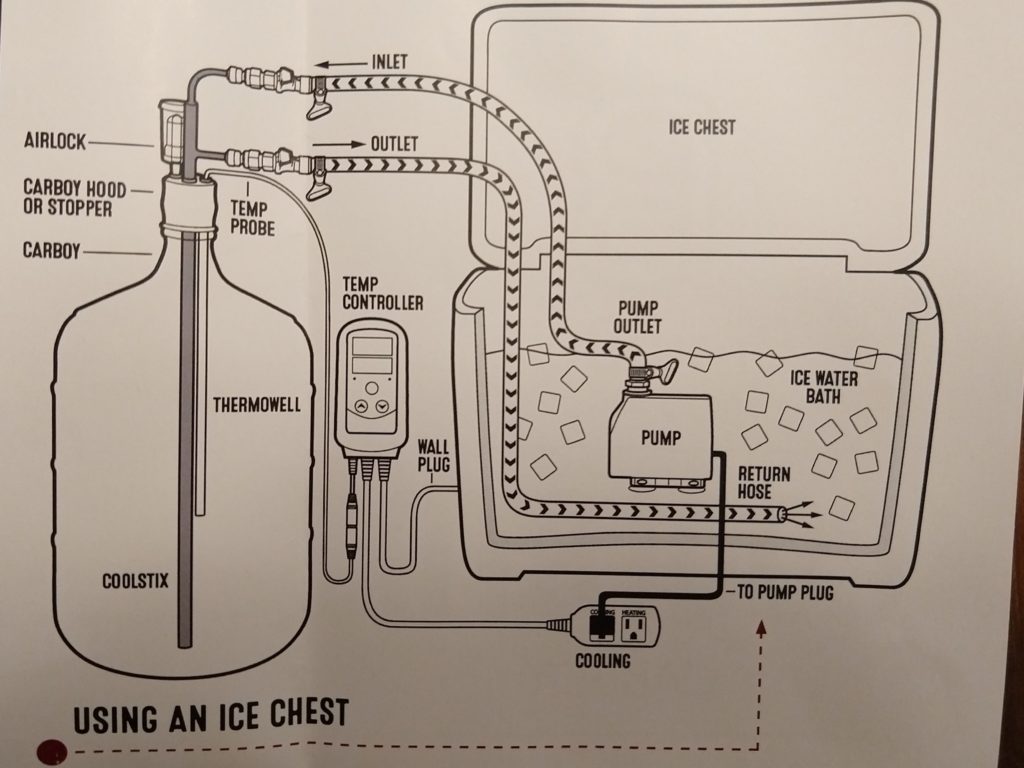 Get Current Pricing, CoolStix at MoreBeer, Review Continues Below

CoolStix setups are available for a wide range of fermenters including Fermonsters, Carboys, Tri-Clamp equipped setups, Speidel Fermenters and more.

The simplicity of the stainless steel rod shape made it easy to clean and sanitize. There were no twists or bends that required special brushes to get at odd corners. And the fact it all passed through a standard size bung (#10 stopper for the Fermonster application I used), made it very versatile to different fermentors.

For the chilling water supply, I filled a 10-gallon cooler with about 4 gallons of water and five 2L bottles filled with water and frozen. I would cycle these 5 bottles in and out of the freezer with a constant rotation of 5 in the freezer, 5 in the cooler with the chilling water. I would change the bottles out every 24 hours, and I still had some ice inside the bottles. The quick connects were great, as they eliminated any dribble of water on top of the fermentor (which has happened with other systems I’ve used that don’t have this type of connect). 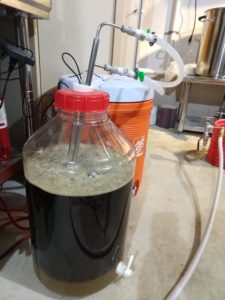 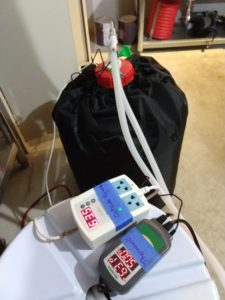 I recognized I needed to do some experimentation to understand the initial cooldown behavior. So I set up an experiment with the fermentor filled with water and a few different temperature sensors. I had one temperature probe down the thermowell in the center of the fermentor, one taped to the outside of the fermentor, and a Tilt floating on top inside with its temperature sensor. I put the fermentor into a heavily insulated bag to keep out environmental influences as much as possible. While not able to capture the heat-generating effects of yeast converting sugars to alcohol, it was enlightening on a few things. 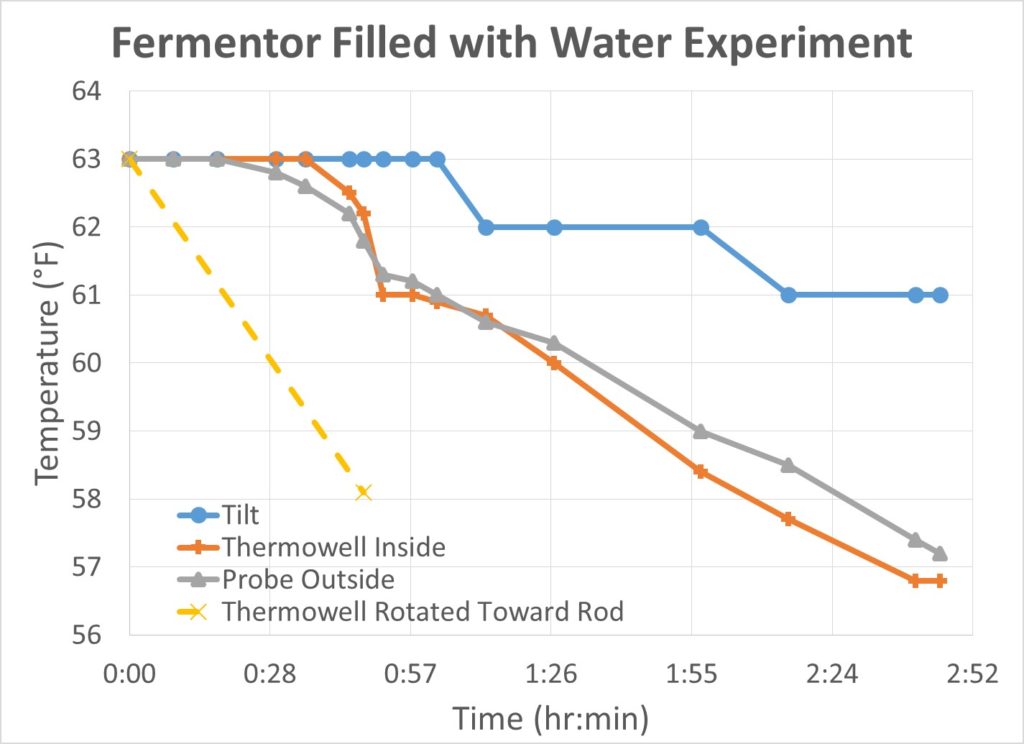 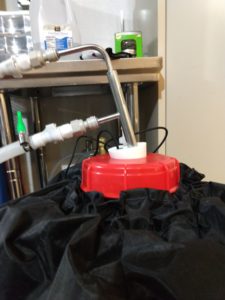 Closeup Tilt of Bung Due to Hoses Pulling on Cooling Rod

Just 48 minutes into the chilling process, I found the temperature sensor inside the thermowell tilted toward the cooling rod measured the target 58F, whereas if the bung was rotated to tilt them apart, it read 62F. A little over 2 hours after starting to chill, the thermowell inside (tilted away from the rod) reached the target temperature of 58F. But with the pump running based on the temperature sensor taped to the outside of the fermentor (about mid-point of water level inside fermentor), it ran for a bit over 2.5 hours.

A lot of data to digest here, but these were the key takeaways I had. First of all, it’s important to rotate the stopper such that the tipping of the cooling rod does not cause the thermowell to be in close proximity to it. Secondly, temperature stratification from top to bottom is a real/significant effect, and when cooling fermenting wort, one needs to have a strategy of where to control the temperature to. Data tracked by a Tilt is at the very top of the wort and this will always read the warmest. Adjusting temperature sensor depth in the thermowell to control to this temperature can cause the fermenting wort to be colder at lower heights inside the fermentor. When trying to chill wort quickly to a desired temperature to pitch yeast, it is best to have the temperature sensor near the top of the wort. And once controlling to the desired temperature, a depth nearer the center will be a better midpoint for temperature stratification from top to bottom of the fermentor.

Overall, the Coolstix provide fermentation temp control when you don’t have the space for a dedicated fermentation fridge, or don’t want one. It’s not the fastest option on the market for bring your fermentor down in temperature, but it’s on par with all of them at maintaining the desired temperature with tight accuracy once you get there.

Get Current Pricing, CoolStix at MoreBeer

CoolStix setups are available for a wide range of fermenters including Fermonsters, Carboys, Tri-Clamp equipped setups, Speidel Fermenters and more. 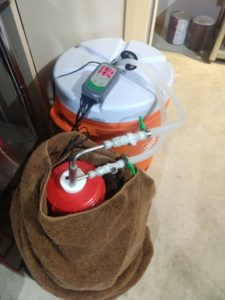 Orientation of Coolstix Puts Thermowell Away from Cooling Rod 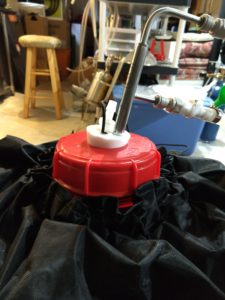 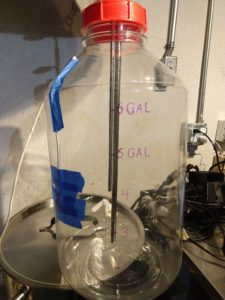 Positioning of Rod and Thermowell in Fermonster 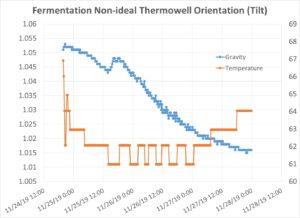