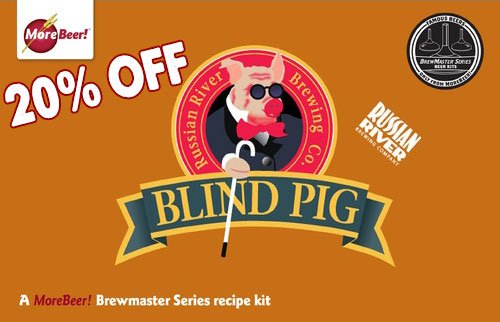 The original Double IPA! Vinnie Cilurzo began homebrewing in 1989 while in college. In 1994 Vinnie started the Blind Pig Brewing Company in Temecula, CA, a small, low-budget mico-brewery known for their extremely hoppy IPA – an IPA which won silver medals at both the Great American Beer Festival and the World Beer Cup. Vinnie sold his share in Blind Pig and was hired to manage and brew at the Russian River Brewing Company, a start-up brewery by Korbel Champagne in Guerneville, CA. In late 2002 Korbel decided to get out of the beer business and sold the Russian River name and brand to Vinnie who is moving the brewery to Santa Rosa, CA, 90 miles North of San Francisco, where he and his wife Natalie are opening a brew-pub which will serve homemade pizza and, of course, all of the Russian River Ales. Vinnie has won 10 awards at the Great American Beer Festival in the past six years and was named Small Brewing Company Brewmaster of the Year in 1999. Almost every beer that Vinnie makes commercially started out as a homebrew recipe at one point or another. Even as a professional brewer, Vinnie still homebrews at least 5 or 6 times a year.

This is the original homebrew recipe that was the basis for Blind Pig IPA which won Silver Medals at the World Cup of Beer and the Great American Beer Festival in 1996, the last year Vinnie brewed it. Two ‘dry hop’ additions along with 1 oz of American Oak are added directly to the fermenter after the first week of fermentation. To say it is a very unique, extremely flavorful IPA is an understatement. Vinnie recommends using White Labs California yeast, WLP001.