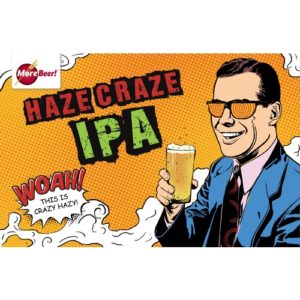 From MoreBeer: “Haze Craze is our take on the hazy North East IPA, also known as New England IPA or Juicy IPA, it is one of the fastest growing beer styles in the US. The style accentuates hop character while maintaining a smooth and creamy mouthfeel. Light in color but hazy due to heavy dry hopping, yeast selection, as well as additions of oat and wheat . Low in bitterness with a huge hop character due to hop-bursting, this beer will satiate even the biggest hop head.

The North East IPA has become popular nationwide thanks to breweries like Tree House Brewing, The Alchemist, Hill Farmstead and Grimm Artistanal Ales. After my first taste of this delicious style, I knew that brewing it at home was a must.”