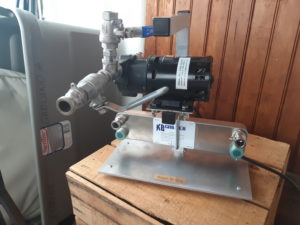 This review is by Homebrew Finds Contributor Tom Brennan.  Read more about Tom and grab a link to his website and YouTube channel below.

After opening the box that came from Keggle Brewing I noticed that this stand was built to last. And it should, considering the abuse most homebrewers put into the equipment…OK maybe that’s just me. It was constructed of mostly aluminum parts and was well welded. It was not difficult to put together, but an addition of instructions would be welcomed.

Get the Gear, Review Continues Below

This is available in two versions.  Just the stand and the stand complete with pump and chiller. 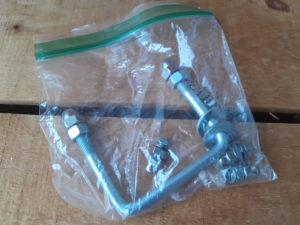 There were 6 acorn nuts, 4 bolts, and 6 lock washers along with U-style bolt. What do I do with them?  It was pretty obvious that the U-bolt was for the plate chiller, but what about the rest? I was able to look at how it came together by looking at the various photos posted on the items web page 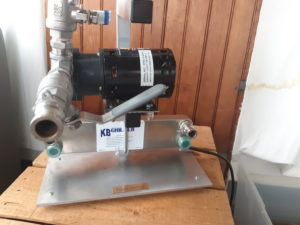 Be aware that the pump you put on the stand needs to me mounted a certain way.  This is due to the Chugger Pump base not being square, which I was unaware of until I tried putting in onto the stand. Again, a set of instructions would have made this process more efficient.  You don’t need to thank me, just be thankful you have this review 🙂 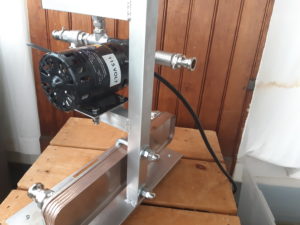 Either the U-bolt was not “squared” properly or the stand’s holes were not drilled to fit the U-bolt.  It took some force to get the bolt into the assembly. I had to squeeze the sides of the bolt while trying to line it up with the holes to get it in to place.  If you wanted to take your chiller out of the stand after your brew day, you may have to do this every time. 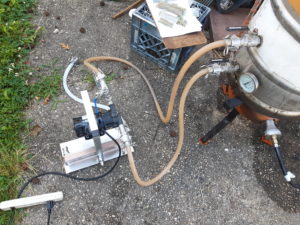 On brew day I immediately saw one of the benefits of having this stand…I could see it. Now hear me out, on brew days I will almost always trip on my pump or hoses because I can’t see the pump (that is typically on the ground). But this stand is just tall enough to be seen, but not in the way. Guess what? Didn’t trip once on brew day.

At first glance you would think having your pump mounted on the top of the stand would make it unstable. That is not the case. I did some stability testing and was impressed by the results. Even without the hoses attached to plate chiller I was able to get the stand at a 60 degree angle and it stood right back up. That is due to the stand’s 13”x6” base, which also has rubber bumpers on it.

The assembly would have been easier with a fine-tuning of the u-bolt and a set of instructions. The stand is made to last. And with that being said, I will gladly incorporate it into my brewing routine.

This is available in two versions.  Just the stand and the stand complete with pump and chiller.

If you have a question about compatibility, just ask and we’ll check for you 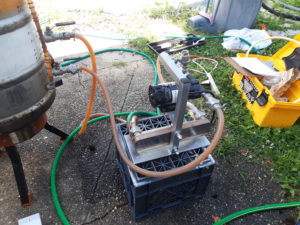 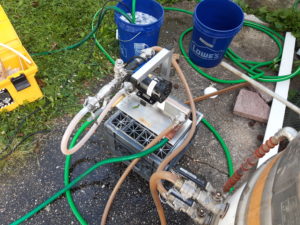 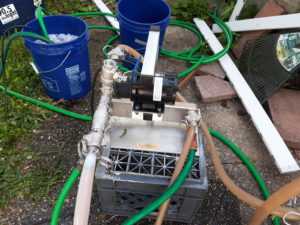 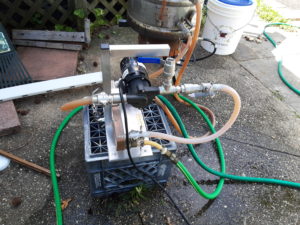 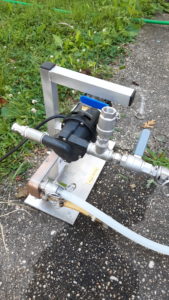 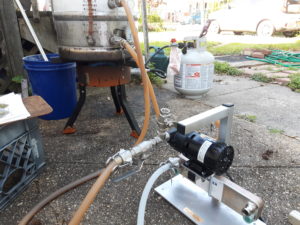 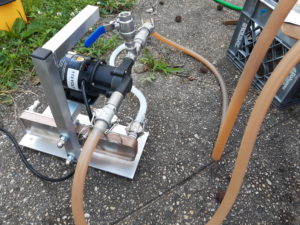 By Tom Brennan.  Tom has been homebrewing for about 6 years. He likes most beer styles but really likes to champion cream ales and Belgian beers. Typically he all-grain brews, but doesn’t shy away from using extract/partial mash beers either. He runs the blog http://hypobrew.com and you can watch him at https://www.youtube.com/hypobrew

Special thanks to Keggle Brewing for providing the stand and chiller used for this evaluation.

Make sure the components you use are compatible and rated for your intended application.  Contact manufacturer with questions about suitability or a specific application.  Always read and follow manufacturer directions.  tag:tpr review:kbpumpstand