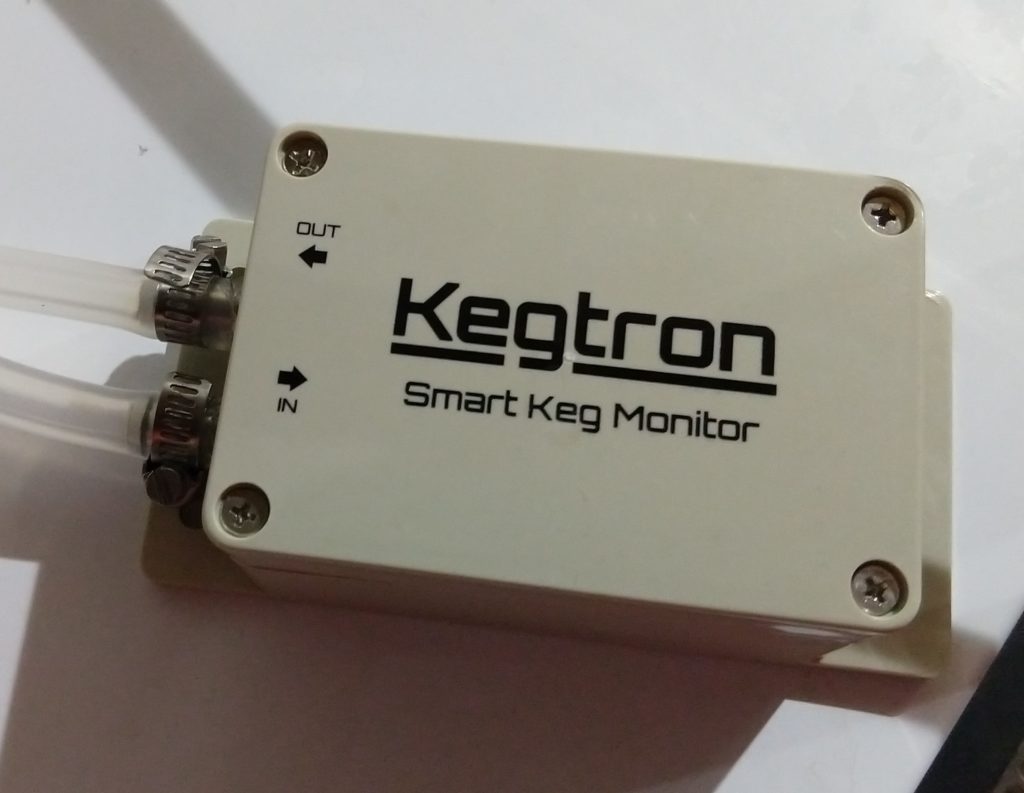 When I first saw the Kegtron keg monitor, it seemed just like a silly way to part homebrewers from their money. It looked cool, but it definitely didn’t seem like something I’d get excited about. And then I tried it.

Kegtron sells 2 models. One for a single tap, one for a dual. The measurement is done by some fancy digital flow meters inside the housing of the unit. There is a circuit board that keeps track of how much beer goes through the flow meters and stores that data on the board. It also has a Bluetooth transmitter that broadcasts this information to an app on your phone/tablet that you’ve paired through the app.

Since the flow meters just keep track of how much beer goes past them, you have to enter into the app how much beer you start with. You hook up your keg, tell it how many gallons are in it, and it tracks from there, deducting beers each time it measures 12 ounces has gone by. It’s customizable, so if you want to count beers by the pint (U.S. or Imperial) instead of 12 oz. bottle, you can do that. The display on the app tells you how many “drinks” are left in the keg. And since you also input to the app what size your keg is (2.5 gallon, 5 gallon, 1/2 barrel, etc.), along with telling you how many beers are left, it has a colorful graphic to show what percentage of your keg is left.

In the app, you can name each of your beers, so if you have more than one Kegtron tap being monitored, they all show up on your screen and you can keep track of each beer with its own space on your display. Since the data is stored on the Kegtron unit itself, and it uses Bluetooth to communicate to your app, if you leave the house and get out of Bluetooth range, you don’t see your beer lists. So it’s intended to be a display at home next to your kegerator, or on your phone so you can direct your underlings to run downstairs and fetch you what you want from the comfort of your couch.

Kegtron provided me a single-tap unit to try out and review at home. I saw it on display at Homebrew Con in Portland, displaying a club’s list of taps and their various stages of keg emptiness. I wasn’t sure that in a less busy setting it would provide the same value. What I found was it got me excited about what I had on tap (like I needed help). It was cool watching it accurately count down the drinks with each glass filled. I have a 4-tap keezer, and I found myself gravitating to whatever I had on the tap with the Kegtron just because it was fun. After a couple weeks I found myself wanting it on all of my taps. It was just so cool, and suddenly seemingly useful to know exactly how much beer was left in each tap. I was a convert.

The Kegtron unit isn’t too big, but you do have to plan where you’re going to put it. You need to have the majority of your beer line between the Kegtron and your tap, and a shorter length between the keg and Kegtron. The manual also has some simple graphics showing you acceptable orientations of the unit. These two configuration items are important to prevent beer foaming and proper measurement, so you need to plan for these. For me, I placed the unit flat on the stepped-up section inside my keezer that generally goes unutilized anyway. It needs to be plugged in to operate, so you have to run this wire out to plug it in. For me, I just laid it across the top of the keezer collar and the lid seal handled this fine.] 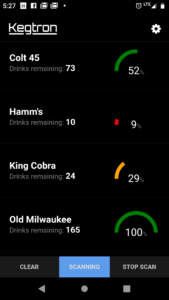 App Screenshot with Multiple Taps – when using a multi-tap version

I was up and running in a matter of minutes. I cut my beer line in two and pushed the lines on over the barbed fittings on the Kegtron unit. It came with two small worm clamps to secure the lines, so that was easy. And with the power cord running out across the lid seal, I was good to go. Connection in the app was super simple and worked flawlessly. The app was easily and intuitively navigateable to pick a couple settings and input my beer volume. Those 10 minutes of set-up were the only time I spent fiddling with the hardware. It just worked. No leaks, no glitchy app function, no dispensing problems. The unit does slow down flow a bit (went from ~8 second glass fill to ~10 seconds), but it did not cause crazy foam like I was concerned about. There was maybe a tiny amount of additional foam, but nothing to complain about.

Over the couple weeks of trialing this, I had zero errors. I finished off my first keg and had no issues with the resulting sputtering of foam from a kicked keg. I hooked up the next keg, entered the new volume and name, and I was in business again. Cleaning is simple, as you just follow your same line cleaning process/products. The parts in contact with the beer are made of PVC-free “barrier” plastic so it doesn’t absorb beer residue like standard beer lines.

The Kegtron worked flawlessly. That’s exactly how you want these homebrew gadgets to work, but isn’t always the case. And you might think it’s unnecessary brewery bling, but I can tell you from personal experience that once you start having the information at your fingertips of how full your kegs are, you don’t want to go back to your less enlightened days. 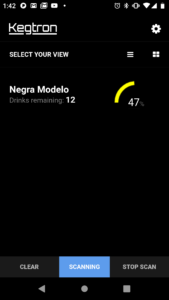 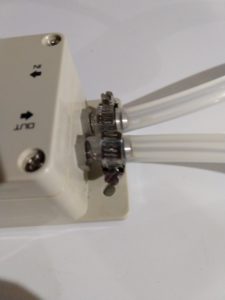 A close up look at the Kegtron’s beer line connections 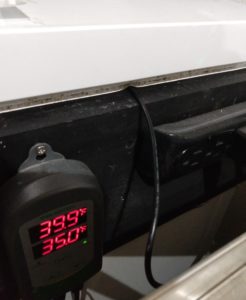 Special Thanks to Kegtron for providing the unit used for evaluation in this review.