Thanks to HBF Reader Brad for this tip!  [8 Ways to Connect with HBF]

Most regulators that homebrewers use for oxygenating wort are simple setups – Example – via William’s Brewing.  They attach to disposable oxygen tanks (typically sourced from a local hardware store) and are little more than on and off valves.  No gauges, no pressure control (other than the degree to which you open and close the valve) and no flow control.

Time and rate give you an idea of how much oxygen you’re really adding to your wort.  Time is easy to track.  Rate, not so much, at least with typical homebrew O2 regulators.  If you want more or less oxygen for your next batch, it’s mostly a guessing game.

Enter an oxygen flow meter.  A flow meter, gives you an idea of flow rate

With both time and flow rate you can establish a more reliable baseline to work off of.  This information should also help you to get better repeatability between brews.

Note that these are typically used for medical applications.  Along those lines barb sizes can be odd from a homebrewer’s perspective, usually smaller than we’re used to.  You need to figure out tubing and connections to a compatible regulator and aeration/oxygenation stone.  That’s where the beauty of the unit Brad found comes in…

From Brad: “I saw something similar that you posted but ultimately decided on this one (more fine tuned scale because goal is only .5 liters/min and stainless hose barbs).
The hose barbs worked perfectly with my Northern Brewer Oxygenation 2.0 kit! No different hoses or adapters needed just spliced it in. I think it’s 3/16” tubing? Just wanted to say thanks and let you know.” 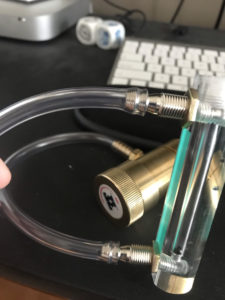 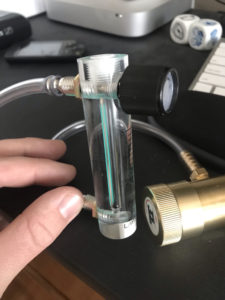