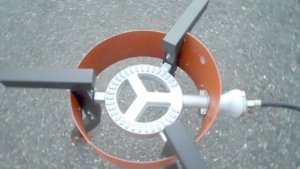 This review is by Homebrew Finds Contributor Tom Brennan.  Read more about Tom and grab a link to his website and YouTube channel below.

When I was looking for a new burner I stumbled upon this utilitarian looking burner it was for me, with the BTU’s (72,000/hr) to back it up. This looked strong, rugged, and simply made. And at first glance, the Anvil Forge Burner had it all for me.

Until I received it in the mail I didn’t realize it was made by Blichmann Engineering. As stated in previous reviews on this site: The Anvil line of products, is… “a premier line of brewing equipment, designed and built by the geniuses at Blichmann Engineering, with help and inspiration from John Palmer! The entire suite of products work in unison to provide a perfect brewing experience from day one, and at a great value to you the homebrewer. You can rest comfortably knowing that Anvil equipment is backed by two of the biggest names in the homebrew industry. Anvil Brewing Equipment: Inspired by Palmer, Built by Blichmann, and Made for You!” Blichmann and Palmer…I’m sold. 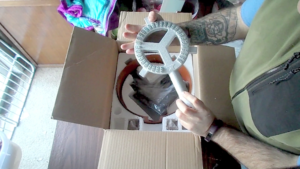 When I first opened up the box I realized that this was made to last. Don’t think simple means cheap. Lots of times something made well, and simple can last forever. I’m not saying this will last as Stonehenge, but why is something made of large stones still standing after all these years?

All the parts were simply constructed. “K.I.S.S.” is one of my favorite sayings for a reason…Keep It Simple Stupid. When something is made well, it will last. And in the case of this burner it will not only hold the test of time, but hold a 20 gallon kettle. Well beyond most homebrewers needs.

The burner assembly was dense. It was almost odd how heavy this was in my hand. I realize it’s just cast aluminum, but boy did it have some “heft” to it. This as not like the other burners I’ve used. There were plenty of jets to evenly heat your burner, in my case a converter keg.

My itch to brew caught me outside on a day what was about 45 degrees fahrenheit. Not the coldest day I’ve brewed, but I wanted to mention this so you can get an idea on how the burner heated my 6.5 gallons of wort. When I fired up the Anvil, my wort was at 137 degrees (F). In 13 minutes I was hitting my hot break and 3 minutes later I was at a boil. That is a serious improvement over my old burner. And when brewing, time has a value.

While turned up all the way, the burner was as loud as you would expect a propane burner to be. However once I achieved a boil I turned down the regulator and it was certainly within a reasonable range of noise.

I had no worries that the burner could hold my wort and keggle. The legs were solidly made with feet that were made to adjust (slightly) on ground that may no be entirely even. Since I brew outside I have to work with a slightly angled concrete slab. 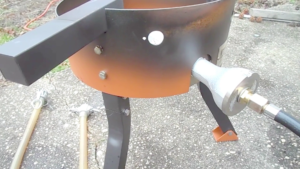 At the end of the boil the orange windscreen turned a bit black. That was not fault of the burner. It could have been my mix of air or something in the propane. Lighting the burner can be an issue if you’re not 100% sure your lighter will ignite, due to the small hole in an otherwise well thought out windscreen.

Overall impressions: For $100, this burner is well worth it. The ruggedness, stability, and power of this burner will suit most homebrewers needs for years after purchase. 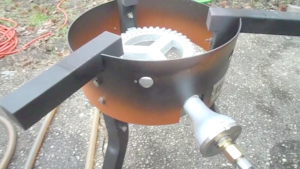 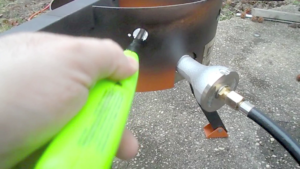 By Tom Brennan.  Tom has been homebrewing for about 6 years. He likes most beer styles but really likes to champion cream ales and Belgian beers. Typically he all-grain brews, but doesn’t shy away from using extract/partial mash beers either. He runs the blog http://hypobrew.com and you can watch him at https://www.youtube.com/hypobrew