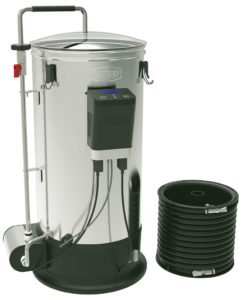 Note from HBF: I have a Grainfather (without connect controller) and I love it.  It’s my go-to brewing system.  I’ve have had or currently have multiple full scale and small scale systems and find myself coming back to the Grainfather again and again.

For a short time, William’s Brewing including a free distilling lid with purchase of a Grainfather with Connect Controller.  No coupon or promo code is necessary. Check product page for current availability.