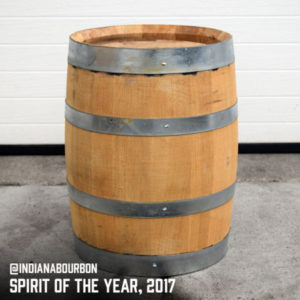 Highlights: “A 5 gallon barrel previously used to age “The Colonel” bourbon from West Fork Whiskey, which won the @IndianaBourbon Spirit of the Year in 2017!”

The Colonel, West Fork Whiskey’s first bourbon, is a wheat centric bourbon that is soft and smooth with hints of vanilla and caramel. Named after the father of one of the founders, this bourbon has a sweeter touch and goes well neat, on ice, with a splash of water, or in your favorite bourbon based cocktails. These characteristics can be lent to anything you choose to put in this barrel, from porters and stouts to hard ciders! Let your imagination run wild with this unique whiskey barrel from West Fork Whiskey.

ABOUT WEST FORK WHISKEY CO.
West Fork was started by three ordinary guys from Indianapolis, who sought out to make extraordinary whiskey. West Fork Whiskey Co. was brought to life as a means to share their interpretation of America’s native spirit with the world.

Their spirits are 100% Indiana from grain to glass, which pays respect to one of the best grain producing states in America!

As of this posting, Great Fermentations has a limited number of these barrels available for $139.99.  Shipping is an additional fee, calculated based on your location.  Check product page for current price and availability.