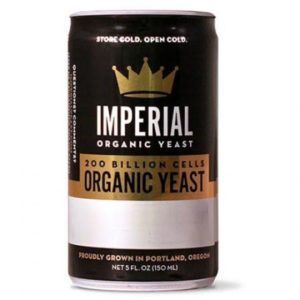 Keg Connection has picked up Imperial’s lineup of Organic Yeast.  Imperial cans their yeast pitches and includes a whopping 200 billion yeast cells in each homebrew pitch.

Imperial has lots of interesting strains include A04 Barbarian which is said to be the same strain as Conan, the yeast that Alchemist Brewer uses for Heady Topper.

ALES
A01 House
The best of both worlds, House is clean and allows malt and hops to shine. This strain is extremely versatile and flocculent enough to drop out of the beer quickly. Best used in American IPAs but works well in English style ales. House is clean at cold temperatures with increased esters as fermentation temperatures increase.

A04 Barbarian
Ready to attack your IPA, Barbarian produces stone fruit esters that work great when paired with citrus hops. Barbarian will give you what you need for an exceptionally balanced IPA.

A07 Flagship
A craft brewing standard, Flagship is a versatile strain loved for its extremely clean character. This strain performs well at standard ale temperatures, but can be used in the low 60s to produce exceptionally crisp ales. Flocculation is in the middle of the road and will typically require filtration or fining to achieve crystal clear beers.

A09 Pub
Brewers swear by this strain to achieve super bright ales in a short amount of time. One of the most flocculent brewer’s strains around, Pub will rip through fermentation and then drop out of the beer quickly. Pub produces higher levels of esters than most domestic ale strains. Be sure to give beers made with Pub a sufficient diacetyl rest.

A10 Darkness
A beautiful strain for stout, porter, brown, and amber ales. Darkness produces a unique character that matches up perfectly with roasted and caramel malts. This strain is alcohol tolerant, so don’t hesitate to throw high gravity worts its way.

A15 Independence
Independence is the strain for bringing some new character into your hop-driven beers. Higher in esters than Flagship, this yeast will give some fruit character that will take your hoppy beers to a new level. While it shines in pale ales and IPAs, Independence is a great all-around strain and will also work well in stouts and English ales.

A18 Joystick
This strain is a fast mover and can be used at the low end of the ale fermentation spectrum to keep it clean. Joystick is a good choice for big, high alcohol, malty beers but has no issues chomping on a hoppy double IPA.

A20 Citrus
Citrus cranks out orange and lemon aromas along with some tropical fruit. Use this strain at high temps for big ester production. A wild saccharomyces strain, it will get a bit funky without the worries of a brettanomyces strain.

A24 Dry Hop
Dry Hop is a blend of A20 Citrus and A04 Barbarian. When this blend goes to work on your hoppy beer, the hop aroma blows up. The combination of these strains produces amazing aromas of citrus, peach and apricot that will accentuate your IPA, pale ale, and any other hop driven beer.

A31 Tartan
Tartan is a traditional strain that accentuates the malt character of Scottish ales. It can also be used for other styles and works well in IPAs due to its clean character. For a higher ester profile, use this ale yeast at the top end of the temperature range.

A38 Juice
Juicy. Fruity. Juice is an amazing strain for East Coast IPAs. The ester profile of Juice brings out the aromas and flavors of the new school hops and creates a beers that is greater than the sum of its parts. Keep an eye on this strain, it likes to move to the top of fermentation and will climb out the the fermenter if too full.

A43 Loki
Loki is a traditional Norwegian strain that has an extremely wide fermentation temperature range. This strain has traditionally been used in farmhouse style beers however, due to it’s wide range it can be used in a variety of beers from pseudo lagers to Belgian inspired beers. On the cool end of the range Loki is super clean; producing little to no esters and phenols. As things start to warm up, it tends to produce a huge fruity ester profile.

Temp: 60-100F, 15-38C // Flocculation: Med-High // Attenuation:75-85%
GERMAN ALES
G01 Stefon
This is the traditional German strain used to produce world class weizen beers where big banana aroma is required. Balanced with mild clove, depending on your wort profile, this strain will produce amazing beers. Stefon will create a slightly higher level of acidity to give your beer a very crisp finish. Slightly underpitching will help increase the banana character.

G02 Kaiser
A traditional alt strain, Kaiser is ready to produce an array of German style beers. It will keep the beer clean and allow the delicate malt flavors and aromas to shine through. Characteristics of this strain make it a good choice for traditional Berliner weisse fermentations. Kaiser is a low flocking strain, so expect long clarification times, but very low diacetyl levels.

BELGIAN ALES
B44 Whiteout
This is the strain for Belgian Wit style beers. Whiteout produces an excellent balance of spicy phenolic character and esters. Along with the necessary aromatics, this strain produces a significant amount of acidity which is perfect for wits and other light colored Belgian ales. Whiteout can be flocculent during fermentation, then become non-flocculent at the end. This may lead to slower than normal fermentation.

B45 Gnome
Gnome is the yeast for brewing Belgian inspired beers in a hurry. This strain is extremely flocculent and drops out of the beer quickly after fermentation. Gnome produces a nice phenolic character that goes well with hops, as well as with caramel and toffee flavors. Great for Belgian ales that need to be crystal clear without filtration.

B48 Triple Double
The perfect strain for your classic abbey ales. Triple Double produces moderate esters with low to no phenolic characteristics. This strain is tried and true and works perfectly in a production environment. Keep an eye on Triple Double, it likes to sit on top of the wort throughout fermentation which may result in a slow fermentation.

B51 Workhorse
Saison…no problem. Belgian stout, double… yep. Workhorse is the strain to use for a wide variety of brews. Super clean, this fast-attenuating strain has good flocculation characteristics. High alcohol tolerance makes this a great option for big Belgian beers.

B56 Rustic
This unique yeast can be used in your saison, farmhouse ale, or other Belgian styles where high ester levels are important. Rustic typically produces a lot of bubblegum and juicy aromas that compliment complex maltiness.

B63 Monastic
This strain is a beautiful yeast for fermenting abbey ales, especially quads; high alcohol and dark Belgian beers. Monastic will produce beers with a high level of phenolic character and esters. It can be slow to begin fermentation but will easily dry out high gravity worts. This strain is a low flocking strain, so expect it to stay suspended for a long time.

B64 Napoleon
This yeast is an insane wort attenuator. Napoleon will destroy the sugars in your saison and farmhouse beers – even the ones in which most brewer’s strains have no interest. When all is said and done, Napoleon produces very dry, crisp beers with nice citrus aromas. Yeast settling times can be long, usually requiring filtration for bright beers.

Temp: 65-78F, 18-26C // Flocculation: Low // Attenuation: 77-83%
LAGERS
L05 Cablecar
This strain is for fermenting your “California Common” beer. Cablecar can produce clean pseudo lagers at ale temperatures, but is also willing to work as a traditional lager strain down to the mid 50s.

L13 Global
The world’s most popular lager strain is ready for you. Global is an all-around solid lager strain that produces clean beers with a very low ester profile. This strain is very powdery, so long lagering times or filtration is required for bright beer.

L28 Urkel
A traditional Czech lager strain, Urkel allows for a nice balance between hops and malt. This strain can be slightly sulphery during fermentation, but it cleans up during lagering. Fermentation at the higher end of the range will produce a beer with minimal sulfur and a light ester profile.

W15 Suburban Brett
Suburban Brett is Brettanomyces yeast that works great as a secondary aging strain. It really shines when used in wood barrels and will produce complex and balanced aromas of sour cherry and dried fruit. It can also be used for as a primary strain for brett only beers