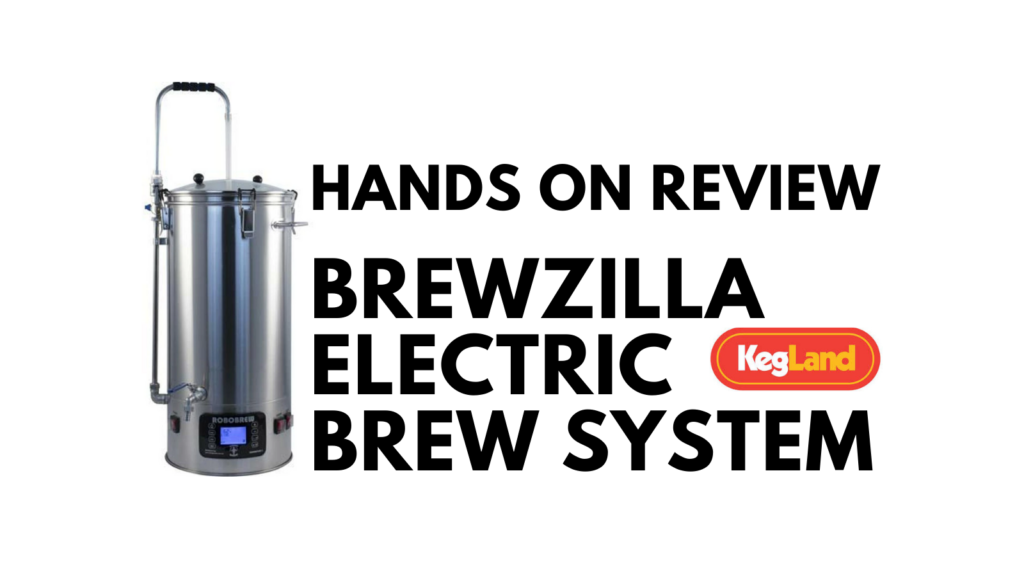 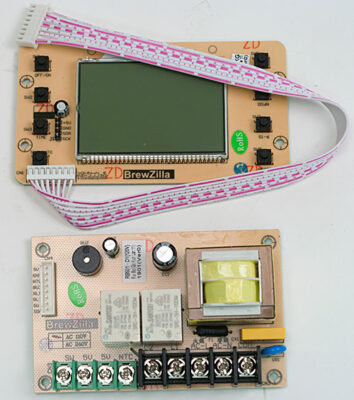 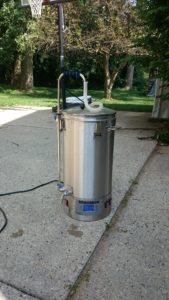 Brewing a couple of batches in the Robobrew helped me get a feel for how to work with it. For certain, it was straightforward to use, and mechanically sound with good controller function. However, it did require some compensations on my part. I noticed on my first brew day that as I poured 7 gallons of distilled water into it from seven 1-gallon jugs, that the embossed volume markings showed 7.3 gallons. That was a bit disappointing, but I just learned to compensate by noting the volume markings and doing the 0.3 gallon math. Contacting the folks at Keg King about this, they noted they had already discovered this issue with some units and had made adjustments with the welding set-up to ensure when the sides of the unit get welded to the base, they line up at the appropriate spot for the volume markers.

The other adjustment I had to make was in the temperature reading. The digital controller read out a temperature on the display that you might assume is the temperature of your mash. But a check with my calibrated thermometer showed the Robobrew was reading about 5-7 degrees hotter than what I measured in the bulk of the fluid. I had some discussion with Keg King about this and basically it comes down to sensor location (on the bottom of the brew vessel, where the heating elements are) and what they were really trying to accomplish with the sensor. Specifically, they wanted to ensure they were reading the hottest part of the mash so as to avoid unintentional scorching down by the elements. In the end, I’m not sure this gets accomplished, because I just did the math and set a higher target temperature. If I wanted the strike water to be 155 degrees, I knew to set the controller to 155 + 5 = 160 degrees. With this adjustment in mind, I would manually set the controller temperature to a setting using my offset and then monitor with my manual thermometer. 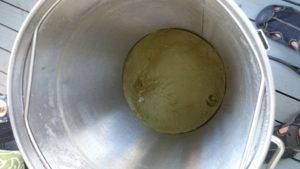 The false bottom that’s left in the vessel after you remove the malt pipe really did work awesome as a hop filter for the pump. Even while brewing a hop-heavy IPA, I didn’t have any issues clogging things up in the pump. And the thick green layer of hop residue on the bottom after I had drained and transferred everything to the fermenter made it clear why that was. The built-in pump was handy to have for pumping wort through my counterflow chiller and then into the fermenter. Although the Robobrew comes with a standard coil immersion chiller (in shiny stainless steel), it doesn’t come with all of the necessary fittings and hoses to make it ready to go out of the box. That was fine by me because I didn’t have need of or want to use a coil immersion chiller. As with all of these electric all-in-one eBIAB systems, clean-up was easy and nice having just the single vessel.

Wanting to better understand the temperature offset, I set up a couple of experiments where I compared the temperature reported by the Robobrew to that which I measured with my calibrated digital thermometer. I did 2 trials with water, one at a smaller volume (4 gallons) and one at a larger volume (7 gallons). These 2 volumes represented roughly what I’d use for a 2.5 gallon batch and a 5 gallon batch. You can see from the plots that both of them have a difference between what the temperature sensor is reading from the bottom of the vessel to what I was reading with my thermometer in the middle of the fluid. The difference was greater with the 7 gallon test than what I saw with the 4 gallon test. I also did a test where I took the 7 gallon volume and set it to hold a steady 152 F for a longer period of time. While I saw the same basic temperature error trend, the controller would switch on to try to control to the 152F, and as a result it held a constant temperature to within a degree during my 30-minute test.

My takeaway from these experiments was that I would need to factor in an offset when programming target temperatures. The temperature sensor error was smallest in the area of typical saccharification rest temperatures (~152 F), which was good. As other rest temperatures are perhaps a bit more flexible if I were to use just this 152 F temperature adjustment and apply it to any other mash step set points. Keeping the pump running to recirculate did a good job of keeping temperature steady and the controller was smart enough to just selectively turn on the 500W burner when needed if the temperature started to drop. This helped keep it from doing drastic swings. Armed with this data and a better understanding of the system capability, I feel my next brew session will go much smoother knowing how to adjust my target temperature and the ability for the unit to hold temperature well. 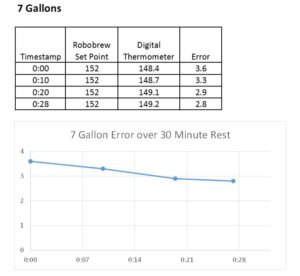 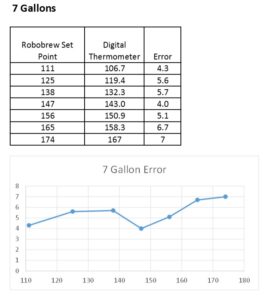 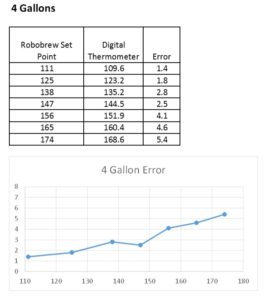 The Robobrew hit the mark for providing all the same functionality as its competition. It has some advantages like the second false bottom to prevent pump clogging and the delayed start timer, and comes in at a very affordable price compared to its main competition. There are some compensations you have to make with volume markings (if you get a unit like mine) and temperature set points. And although it has an overall good quality appearance, there are spots where you notice the thinner metal gauge in things like weld spots, trim edges, and part handling susceptibility to damage. But altogether, these items are relatively minor, and at the price of $480 compared to $890 for a similarly-equipped Grainfather model, it quite simply puts electric brewing within reach of a lot more folks. And that’s a good thing.

Note that the Robobrew has been rebranded to the Brewzilla since this review was released. 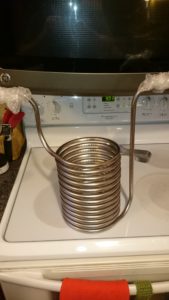 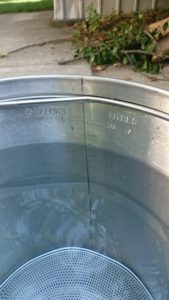 Robobrew filled with 7 gallons of water, but reading 7.3 gallons 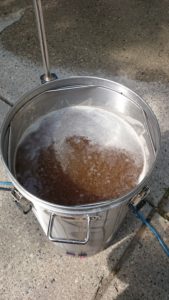 Boiling Wort in the Robobrew

We are Homebrew Review HQ!  See Our 10 Most Recent Reviews

Make sure the components you use are compatible and rated for your intended application.  Contact manufacturer with questions about suitability or a specific application.  Always read and follow manufacturer directions. review:bprobobrew tag:tpr rs:5