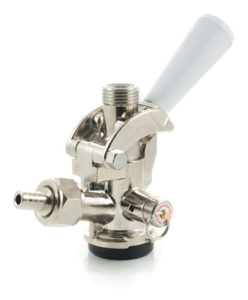 Commercial Couplers at Adventures in Homebrewing

Most domestic US commercial breweries use Sankey D Style Keg Couplers.  However, there are several styles of Sankey Taps including D, S, A, G, HS and U.

Adventures in Homebrewing has a great resource list that let you know which commercial brewers use which style.  A downloadable PDF version is also available.