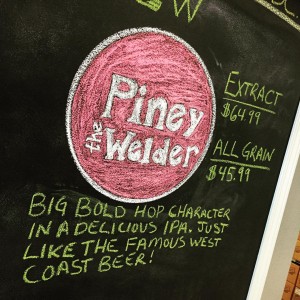 “A big, West Coast Double IPA crammed with loads of aroma hops! Piney the Welder is a clone of another similarly-named “elder” beer that has been named the #1 beer in America by the AHA many times over. It gets its bitterness from hop extract, delivering a good hop bite and character that balances out the maltiness of the beer. Using a little bit of Crystal 60L and Carapils to give the beer character. A plethora of American hops give this beer big hop flavor and aroma. Three huge, very American hops contribute to this hoppiness: Centennial, Columbus and Simcoe. With a load of hops going in at the end of the boil and at dry hop time, Piney comes out like liquid hop nectar. The perfect double IPA for true hop heads!”

Available in both extract and all grain versions