Thanks to Jay for this tip!  [8 Ways to Connect with HBF] 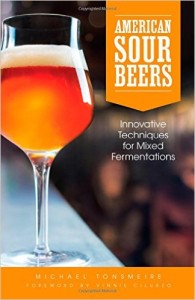 More About American Sour Beers via Brewers Publications
“One of the most exciting and dynamic segments of today’s brewing scene is American-brewed sour beers, with craft brewers and homebrewers alike adapting traditional European techniques to create some of the world’s most distinctive and experimental styles. This book details the wide array of processes and ingredients in American sour beer production, with actionable advice each step of the way. Inspiration and practical applications for brewers of all levels are provided by some of the country’s best known sour beer brewers, including Russian River, Jolly Pumpkin and The Lost Abbey. View the American Sour Beers”