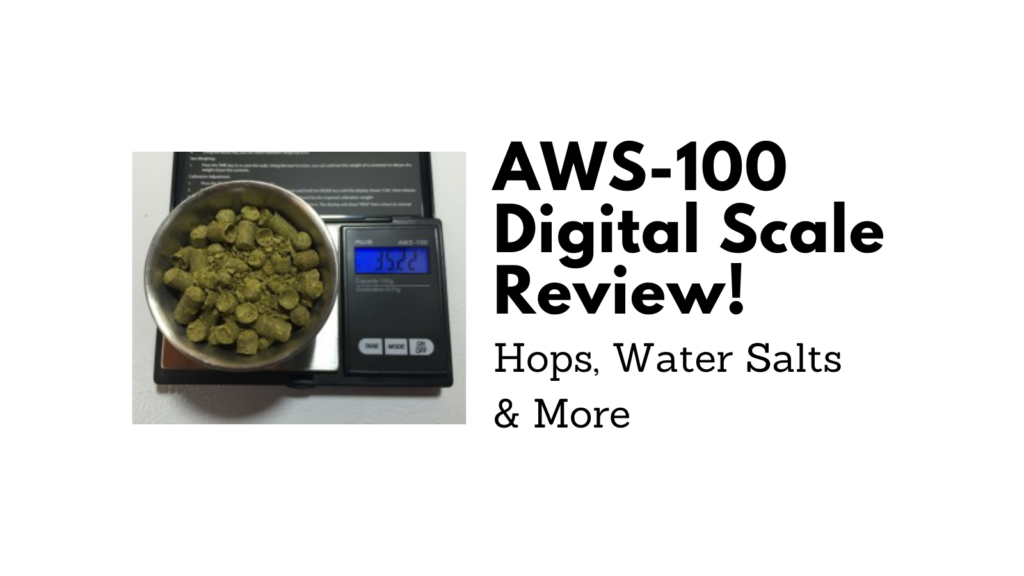 Why a Digital Gram Scale for Homebrewing?

Features to Look for in a Homebrewing Gram Scale

This scale has 1/100th gram resolution making it great for accurately weighing hops, small amounts of specialty grains and water salts.  It has a 100 gram (3.52 ounce) capacity. 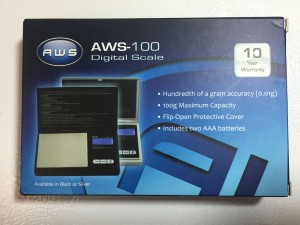 Note that multiple variations of this product may be available, as such a different version may appear at these links 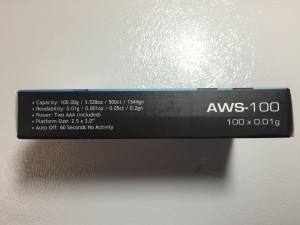 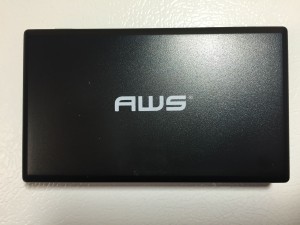 Front of the scale when closed.  The protective cover is a nice feature.  You don’t want to store a scale with any weight or pressure on the platform.  The built in cover keeps that from happening. 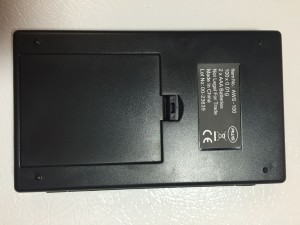 Back of the scale 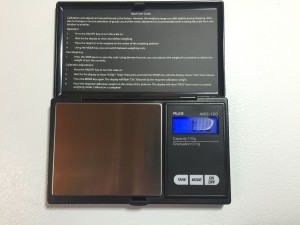 Front of the scale when open 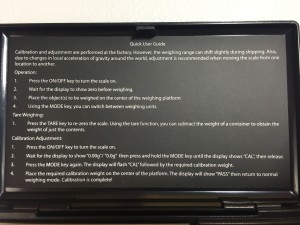 Close up of the inside of the protective lid built into the AWS-100.  This includes a handy Quick User Guide.  Click the picture above to zoom. 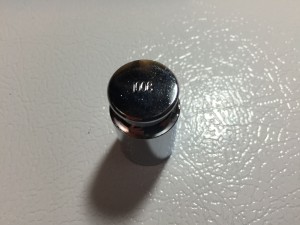 I purchased this 100 gram Calibration weight at the same time I got the AWS-100 – search Amazon for “100 gram calibration weight”.  It’s worth picking up one of these.  You’ll see why next. 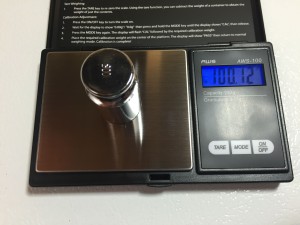 The 100 gram weight reads 100.12 grams.  The manual states that “calibration and adjustment are performed at the factory.  However, the weighing range can shift slightly during shipping”.  If the scale is weighing within an acceptable tolerance the scale should be left alone.  If it is outside of tolerance, it should be calibrated.  The manual says that the tolerance for this scale is .02 grams.  .12 is 6 times acceptable tolerance.  Calibration is required. 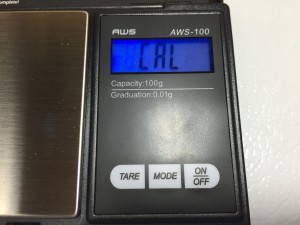 To calibrate you hold the mode button until CAL appears on the screen.  Press Mode again and it prompts you to put a 100 gram calibration weight on the platform

Put the weight on and the… wait 🙂 and the scale will pop up pass.  I’m guessing it calibrates itself using the weight and then re-tests the weight to ensure that it’s within tolerance.  If it is… whammo… pass. 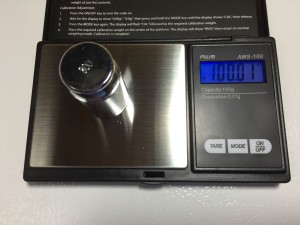 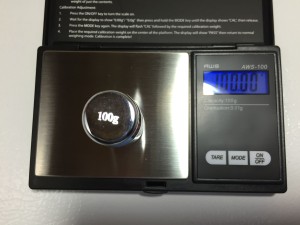 A note on accuracy: I don’t have lab quality weights.  Slight variances in accuracy tests could be a reflection of either the scale or the weight or both.  My guess is both are generally to blame.  If 1/100th (one one-hundredth) of a gram is an issue for what you’re doing… you’re going to need a lab quality scale. 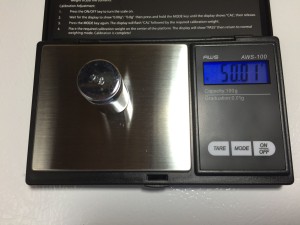 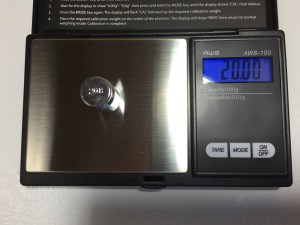 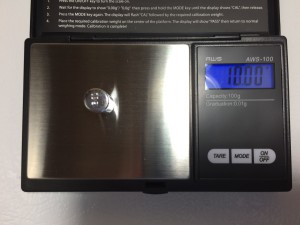 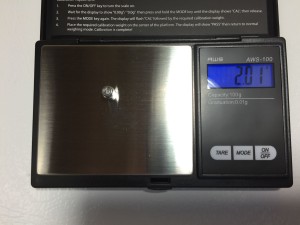 Reads 2.01 with a 2 gram calibration weight 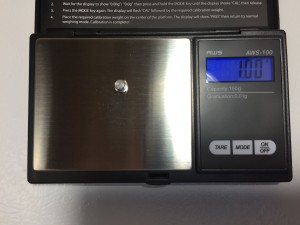 Reads 1 with a 1 gram calibration weight 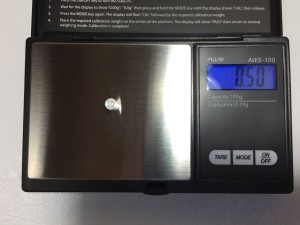 Reads .50 with a 500 milligram calibration weight 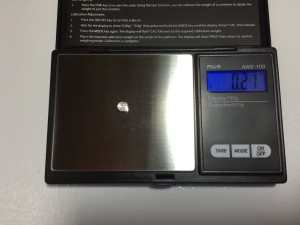 Reads .21 with a 200 milligram calibration weight 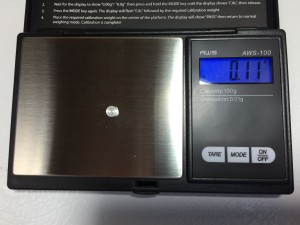 Reads .11 with a 100 milligram calibration weight.  Getting a reading on this light of a weight verifies that this scale is good for both hops and water salts.  It’s not really necessary (at least in my book) to get down to tenths of a gram for hops (although it’s nice to be able to do).  It is necessary to get down to this range for water salts. 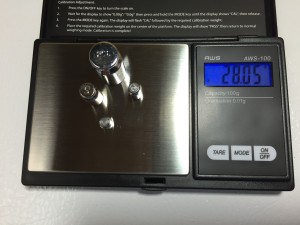 Weighing 28 grams (about one ounce) of calibration weights using the AWS-100.  Hops and water salts are a couple of things that I like to weigh in metric.  The other is… yeast starter wort.  That is very easy to formulate using liters and grams.  1 liter of water goes with 100 grams  DME.  If you need a .5 liter starter it would be .5 liter of water + 50 grams of DME. 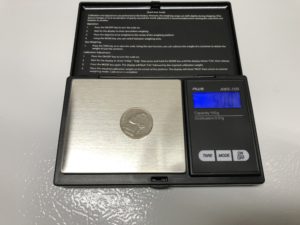 Tip: a US Nickel is right at 5 grams 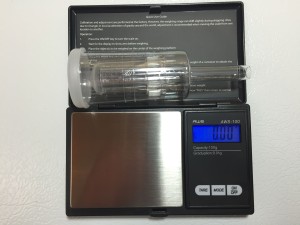 For size reference… next to a 3 piece airlock 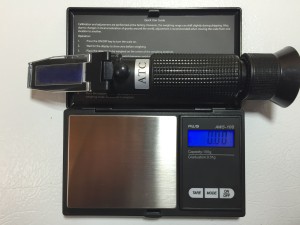 Size reference… next to the RSG-100ATC Dual Scale Refractometer 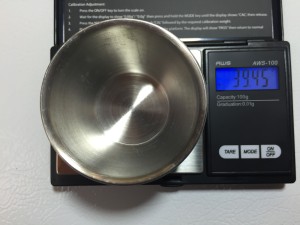 Weighing a stainless sample cup – search Amazon for “2.5 ounce stainless steel ramekin” – (part of my Brew Day Box).  This is a good example of the beauty of the Tare Feature.  Notice that the scale reads 39.45 grams. 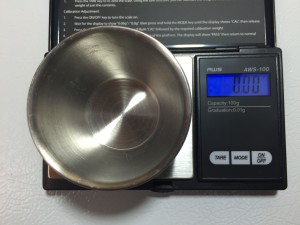 A press of the Tare button effectively zeroes out the scale. 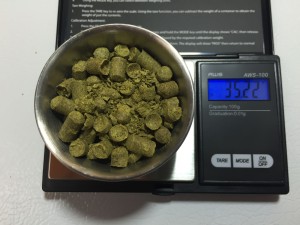 Because the container is subtracted, I’m weighing just the contents.  That means I have 35.22 grams of Amarillo hops here. 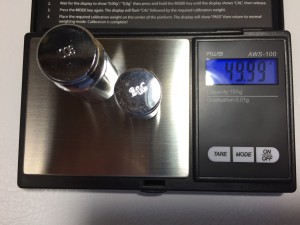 I’ve owned this since December 2014.  I can tell you that it is a great scale for homebrew use.  It had the features I was looking for in a gram scale including tare and 1/100th gram precision.  It has proven to be accurate and has held up over time.  If you’re looking for a hops and water salts scale, the AWS-100 deserves a hard look.

What are Others Saying About the AWS-100?

Note that multiple variations of this product may be available, as such a different version may appear at these links 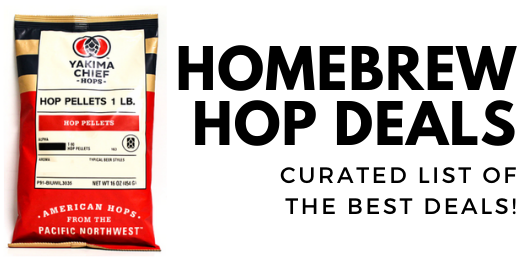 We are Homebrew Review HQ!  Our 10 Most Recent Reviews

Make sure the components you use are compatible and rated for your intended application.  Contact manufacturer with questions about suitability or a specific application.  Always read and follow manufacturer directions. review:aws100gramscale tag:tpr rs:5