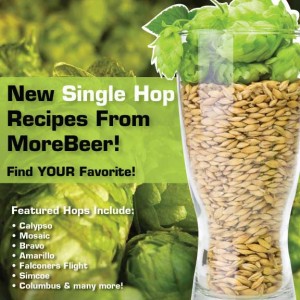 More Beer has announced a series of new kits each featuring a single hop for flavor, aroma and dry hop additions.

Description of the series from morebeer.com:

Everyone has a favorite hop, but when comparing hops in different recipes, it’s difficult to determine the differences in those hops. If you’re comparing a pale ale with four specialty malts to a pale ale with one specialty malt, the aroma and flavor is going to vary – even if you use the same hop! This is what prompted us to bring in the “Single Hop” series. The only difference in the following kits is the late addition hops. We do include 0.5oz of Magnum hops as a bittering hop, as this hop keeps the bitterness neutral and clean, making the aroma and flavor from the late hop additions the only difference.

Try a few of these, and find your favorite hop! Or, brew one and have a friend brew the other for a taste off!