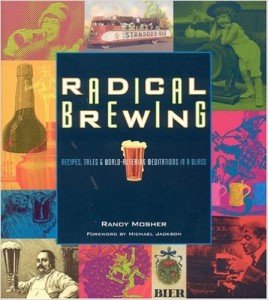 Radical Brewing by Randy Mosher.  The homebrewing classic is available in both Paperback and Kindle Versions.

About Radical Brewing - from the Publisher

“History, humor and homebrewing converge when the creative and prolific mind of Randy Mosher explores the expressive side of beer in Radical Brewing.

Mosher sees homebrewing—and by extension craft brewing—as an antidote to corporate, mass-market beers. Over two decades of brewing and beer research, he has probed the depths of beer history in both his reading and his brewing. Radical Brewing displays the many unique ales and lagers that have resulted from his celebration of beer while serving as a vehicle for discussing a creative, “outside the lines” approach to modern brewing. Through it all, the reader is treated to Mosher’s irresistible love of beer and brewing as well as some very humorous asides on beer history.

The infectious spirit of homebrewing is hard to resist when one reviews Mosher’s recipe for “Electric Aunt Jemima Maple Buckwheat Ale,” checks out the section on “(Not so Dumb) Blonde Ales” or chuckles through his fanciful description of the birth of beer featuring the ancient Harl’eh-riding Ur’s Angels. Best of all, the two-color visually rich content comes in self-contained segments that instantly engage readers no matter what page they turn to.

Typically, modern brewing books focus on the science of how to brew—and Mosher has mastered all of that. But in Radical Brewing, he focuses on the creative, expressive opportunities available to those with a brew kettle. Each chapter offers techniques and recipes as well as ideas for independent exploration of new brewing frontiers. The result is a text that both informs and inspires experienced brewers while providing an engaging and intelligent introduction to the hobby for newcomers.

Famed beer writer Michael Jackson once called Mosher “some kind of homebrewing genius” and in the forward to Radical Brewing, he further lionizes this genius, saying “His activities are probably a threat to our morals. Passion, imagination and tenacity are a challenge to the established order.” These two masters of beer have collaborated in the past, as Jackson notes when he tells how Mosher accurately recreated the flavor of a now-lost beer style that even Jackson had only once tasted himself. And though Jackson’s accolades for Mosher are great, one can only imagine that they will pale as practicing brewers of all stripes begin to digest Mosher’s treasure-trove of beer ideas and render their own reviews of this delightful book.”

Radical Brewing: Recipes, Tales and World-Altering Meditations in a Glass