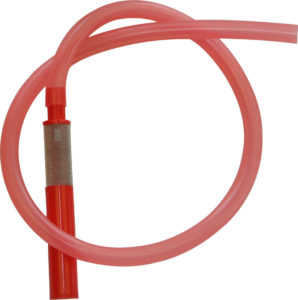 I periodically ferment in 10 gallon Cornelius style kegs.  For the most part this works great.  They are stainless vessels that aren’t prone to breakage and are pressure capable.  The biggest headache is transferring fermented beer.  I do this under CO2 pressure and transfer from “liquid out” to “liquid in” on the receiving keg.  It usually works ok, but problems arise when there is a lot of trub or if I dry hop a lot.  To combat this, I used to have three dip tubes of different lengths.  I tried to guess which one was the right length based on the beer.  It was always a guessing game that I never exactly won.  I either leave good beer behind, transfer yeast and trub or worse get clog during transfer.  Worst case scenario is multiple clogs as I I’ve experienced with heavily dry hopped beers.

I shared this in some of the forums and got some good feedback and ideas.  One post pointed to part of the Cask Widge system as a possible solution.  This system, used for serving cask beers, contains a float.  It floats on the end of a very flexible piece of tubing and has a screem on the intake part of the float.  Beer is transferred out through the float. 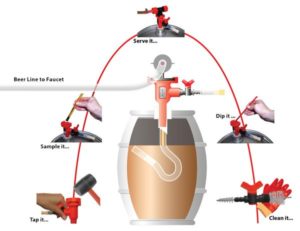 Here’s a diagram of how it works in a cask.  Replace the cask with a 5 or 10 gallon Cornelius style keg and you get the idea

I was excited about the idea so I looked for a distributor.  There is one distributor in the US, but that distributor generally works with commercial establishments and prices are high.  At this point, I contacted the owner of Cask Widge.  After some some communication back and forth, Cask Widge graciously sent me several floats for testing with Cornelius kegs.

Initial testing in a 10 gallon keg for post fermentation transfer under pressure – I attached a float to a gas out length dip tube placed on the liquid side of a 10 gallon keg.  It fit perfectly over the dip tube, no clamp required.  Note: this has to be done after the dip tube is installed by reaching through the keg lid.  For the first test, I transferred under siphon so I could see what happened to the float.  It worked perfectly right out of the box and frankly looked like it was designed for this use.

Since, I’ve used this many times for transferring fermented beer to a 5 gallon keg under pressure.  It has worked perfectly for me.  The way the float ends up lying on the bottom allows it to transfer nearly everything, all the while leaving trub behind and staying clog free.

I’ve also used Cask Widge floats to serve carbonated beer from a 5 gallon keg.  The tubing length needs to be tweaked to get this to work well.  The standard tubing size (at least for the Cask Widges I have) is perfect for a 10 gallon keg, but too long for serving from a 5 gallon keg.  I trimmed a little tubing off (about a half inch at a time) until I dialed this in.  I knew the tubing was too long when the float caught on the side of the keg and beer stopped.  A slight shake fixes that.

Advantages of the Cask Widge Float: 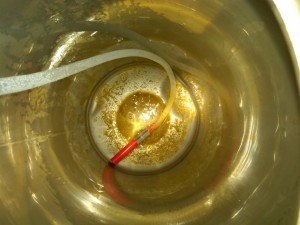 A photo of an empty 5 gallon keg after dispensing the entire keg using the Cask Wide Float.  Clear pints from beginning to end and it got nearly every drop of beer out of the keg. 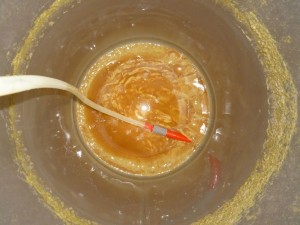 As of this update, no homebrew supply shop has picked this up. Cask Widge is still gauging interest in the US homebrew market for a float marketed to homebrewers for use in Cornelius kegs.

You Can Help! Are you interested in a homebrew shop picking up the Cask Wide Float for use in Corny Kegs?  You can help.  Let’s get Cask Widge’s attention!

13 thoughts on “Cask Widge Floats for Fermenting and Serving Using Corny Kegs? – You Can Help”